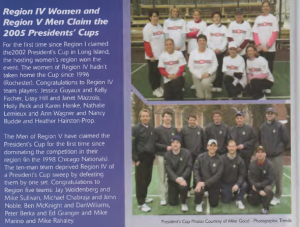 The Men of Region V have claimed the President’s Cup for the first time since dominating the competition in their region (in the 1998 Chicago Nationals). The ten-man team deprived Region IV of a President’s Cup sweep by defeating them by one set. Congratulations to Region five teams: Jay Woldenberg and Mike Sullivan, Michael Chabraja and John Noble, Ben McKnight and DanWilliams, Peter Berka and Ed Granger and Mike Marino and Mike Rahaley.