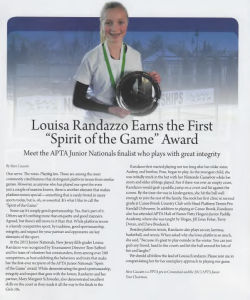 One serve. The wires. Playing lets. These are among the most commonly cited features that distinguish platform tennis from similar games. However, as anyone who has played our sport for even just a couple of seasons knows, there is another element that makes platform tennis special—something that is rarely found in many sports today, but is, oh, so essential. It’s what I like to call the “Spirit of the Game.”

Some say it’s simply good sportsmanship. Yes, that’s part of it. Others say it’s nothing more than etiquette and good manners. Agreed, but there’s still more to it than that. While platform tennis is a keenly competitive sport, by tradition, good sportsmanship, integrity, and respect for your partner and opponents are key elements of the sport.

At the 2013 Junior Nationals, New Jersey fifth-grader Louisa Randazzo was recognized by Tournament Director Tom Safford and his team of volunteer hut commanders, from among over 200 competitors, as best exhibiting the behaviors and traits that make her the first-ever recipient of the APTA Junior Nationals “Spirit of the Game” award. While demonstrating the good sportsmanship, integrity and respect that goes with the honor, Randazzo and her partner, Mary Margaret Schroeder, also demonstrated excellent skills on the court as they made it all the way to the finals in the Girls 10s. [enlarge image to read more]