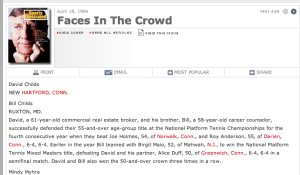 It is rare that platform tennis, no less its players, find their way into a national sports magazine, but the “Faces In The Crowd” section in the April issue of Sports Illustrated featured two outstanding champions, the Childs brothers, Bill and Dave.

The article documented that they had just successfully defended their 55+ National Championship for the fourth consecutive year. It further noted that they had won the 50+ crown three times in a row. It also recorded Bill’s triumph with Birgit Maio in the Mixed Masters Championship, and indicated that he defeated his brother and Alice Duff in a semifinal match in that tournament.