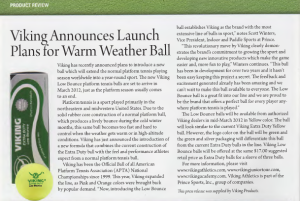 Viking has recently announced plans to introduce a new ball which will extend the normal platform tennis playing season worldwide into a year-round sport. The new Viking Low Bounce platform tennis balls are set to arrive in March 2012, just as the platform season usually comes to an end.

Platform tennis is a sport played primarily in the northeastern and midwestern United States. Due to the solid rubber core construction of a normal platform ball, which produces a lively bounce during the cold winter months, this same ball becomes too fast and hard to control when the weather gets warm or in high-altitude conditions. Viking has just announced the introduction of a new formula that combines the current construction of the Extra Duty ball with the feel and performance athletes expect from a normal platform tennis ball.

Viking has been the Official Ball of all American Platform Tennis Association (APTA) National Championships since 1999. [enlarge image to read more]