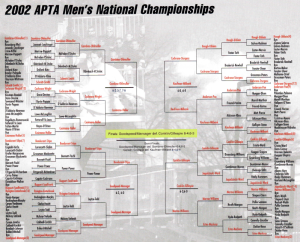 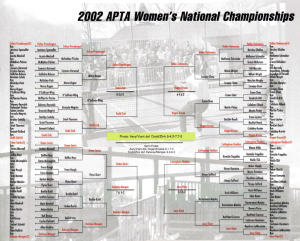 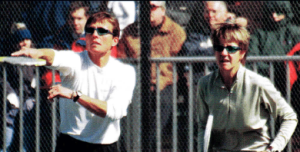 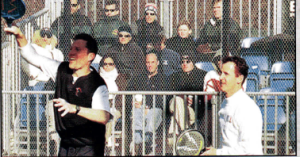 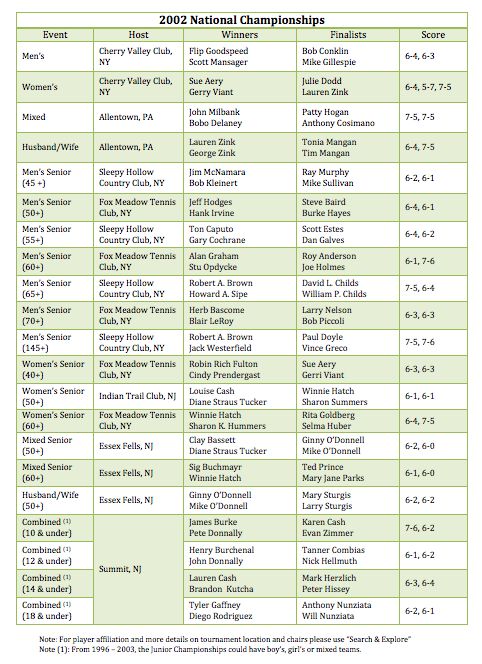 The Long Island Platform Tennis Association, Chaired by Charles Vasoll, hosted the 2002 Men’s and Women’s Open National Championships from March 8-10. The weather was a comfortable 65 degrees; however, occasional wind gusts up to 30 miles per hour were not uncommon. One thing was for sure, a wind of change was in the air.

Going into the Men’s Round-of-16, no major upsets occurred. But everyone knows that anything can happen in the Nationals. The 16′s saw two upsets: Mike Cochrane-Martin Sturgess (12) def. Brian Uihlein-John Hough (4) and Mike Marino-Chris Williams (10) def. Scott Estes-Scott Mackesy (2). With the gates opened up. Mike Gillespie-Bob Conklin (6), the highest remaining seeded team in their half of the draw, advanced past Marino- Williams in the quarter-finals and over John Milbank and Jim Kaufman (8) in the semi-finals (Milbank-Kaufman advanced over Sturgess-Cochrane in the quarters).

On the other half of the draw, five-time National Champions Scott Mansager-Flip Goodspeed (3) advanced past Andy Todd-Joe Leytze in the 16′s, and then defeated Scott Bondurant-Greg Stipa (7) in the quarterfinals. In addition, the top-seeded defending champs, David Ohlmuller and Chris Gambino earned their semifinal spot by overcoming Fritz Odenbach-Mike Stulac in the 16′s and Anthony Cosimano-Steve Haller (5) in a 7-6 third set quarterfinal tiebreaker.

The Sunday morning semi-finals were spectacular. The first event was a rematch of the 2001 National Finals. This time, however, Goodspeed and Mansager were out for revenge – earning a straight-set 6-4, 6-3 victory over Gambino-Ohlmuller. In the other semi, the sixth-seeds triumphed over the eighth-seeds.
The finals was an emotional experience for many as Goodspeed and Mansager took back their former crown in a 6-4, 6-3 win over Gillespie and Conklin. Along with the title, Flip and Scott earned enough points to catapult them up as the #1-Ranked team in the country for the first time in four years.

Historically, women’s platform tennis has been a little more predictable than the men’s. Up until the National Women’s Open quarterfinals, where the top eight seeded teams advanced, this was again the case.

In the quarter’s, the big upset occurred when up-and-coming stars Lauren Zink and Julie Dodd (6) defeated veterans Robin Fulton and Cindy Prendergast (2) 6-3, 6-3. On the other half of the draw, Patty Hogan and Sandra Krusos (8) won 6-4, 6-2 over Hilary Debbs and Kerri Delmonico(4). Having just paired up, the APTA abided by their rules of tournament placement and could not seed Hogan and Krusos higher than eight.

In the semi-finals, Dodd-Zink pulled off another amazing victory, defeating Bobo Delaney and Tonia Mangan (3) 6-3, 6- 3. In the other semi, defending champions Sue Aery and Gerri Viant defeated Hogan-Krusos 6-1, 7-5. The stage was set for the top-ranked veterans to play the sixth-seeded challengers.

A two-hour battle raged on in view of 400+ spectators as Aery and Viant pulled out the victory as an un-returnable let serve dribbled over the net on an ad-in match point. In the end, the champions showed why they are the best and the challengers showed why one day they could be.