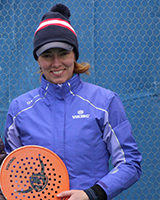 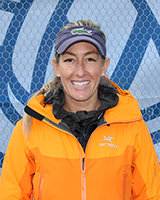 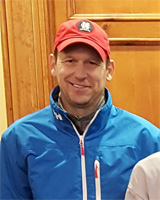 Pamela Macrae Birmingham 1927-2017 (HOF 1997), died on January 15, 2017 in Essex CT. She and her husband, Wooly (HOF 1979),were enthusiastic players of the game in Westchester County, NY and were instrumental in introducing and growing the game in western Pennsylvania when they moved to Sewickley, PA in 1959.

Platform Tennis Hall of Fame: Induction into the Platform Tennis Hall of Fame is the highest award that can be earned in platform tennis. It is presented to individuals who have achieved distinction in the play of platform tennis and/or who have otherwise contributed to the growth, development and administration of the game. Recipients have also demonstrated a high level of integrity, sportsmanship, and consideration for others and thus earned the respect and admiration that they deserve for their endeavors in platform tennis.

In 2002, the APTA established The Platform Tennis Museum and Hall of Fame Foundation (PTMHOFF) as a separate corporation and nine directors were elected. The PTMHOFFs mission is to capture the history of the game and celebrate those individuals whose achievements and contributions earned them a place in the Hall of Fame, and to provide this information in a format readily accessible to platform tennis enthusiasts around the country. In the year 2004, that corporation applied for, and received, tax-exempt status under IRS code 501(c)(3), so that contributions to this effort could be tax deductible. 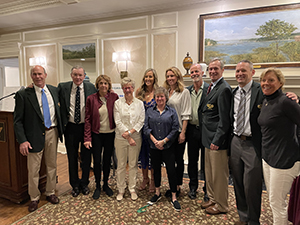 History of the Hall of Fame: On February 18, 1965 the Executive Committee of the APTA met at the Princeton Club and decided that the Association should inaugurate an Honor Award to be presented to those individuals who had achieved distinction in the play of platform tennis or who had made outstanding contributions to the game. The award for men was a green blazer jacket with the APTA logo, while women received a specially designed gold necklace, also with the APTA logo. This tradition continued until 1980, when there was a hiatus in activity.

In the early 1990s, under the leadership of APTA president Chuck Vasoll, the Honor Award was reactivated, and in 1992, after a gap of thirteen years, the APTA honored three individuals at a ceremony at Nassau Country Club in Glen Cove at the National Championships held on Long Island.

In 1996, the APTA Board decided to replace the Honor Award and establish the Platform Tennis Hall of Fame, at the recommendation of President Charley Stevens. The board voted unanimously to induct all forty former Honor Award recipients into the Hall of Fame1. In the years that followed, the Hall of Fame activity has grown in visibility, with the election decisions receiving a great deal of attention and the induction ceremonies becoming popular.

Note 1: “On a motion by Bob Brown, the name of the ” Honor Award” was officially changed to ” Hall of Fame” and the new designation extended to all past recipients.” Platform Tennis News, Summer 1996

By late 2004 the PTMHOFF was fully operational with the goal of establishing a physical entity that would house a museum and Hall of Fame. As part of that effort extensive biographies of all the Hall of Fame members were developed and abbreviated versions uploaded to the APTA website as an interim measure.

With the passage of time it became clear that a physical presence would be difficult to achieve and the idea of a “virtual” Museum and Hall of Fame started to form and gradually gained acceptance. After a period of extensive research into the games history enough material had been gathered to build the present website which went “live” in early 2014.

In 2015 the PTMHOFF donated the website to the APTA where it will be kept current with developments in the game and celebrate new indictees into the Platform Tennis Hall of Fame..