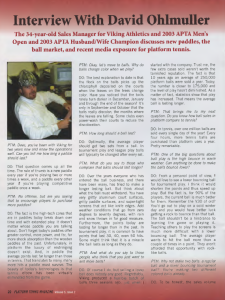 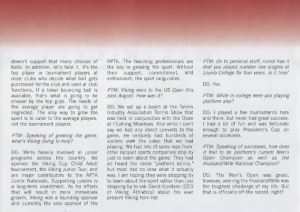 PTM: Dave, you’ve been with Viking for two years now and know the operations well. Can you tell me how long a paddle should last?

PTM: No offense, but are you saying that to encourage players to purchase more paddles?

DO: The fact is the high-tech cores that are in paddles today breakdown over time and with extended play. It doesn’t matter whose paddle you are talking about. Don’t forget today’s paddles offer greater control, more power, and far, far more shock absorption than the wooden paddles of the past. Unfortunately, in platform the luxury of restringing doesn’t exist. And, in paddle the average points last far longer than those in tennis. That translates to many, many more hits a paddle must survive. The beauty of today’s technologies is that tennis elbow has been virtually eliminated from the game.

PTM: Okay, let’s move to balls. Why do balls change color when we play?

DO: The best explanation to date is that the flock on the balls picks up the chlorophyll deposited on the courts when the leaves on the trees change color. Have you noticed that the balls rarely turn darker in December, January and through the end of the season? It’s only in September and October when the leaves are falling that the balls really discolor. Some clubs even power-wash their courts to reduce the discoloration.

PTM: How long should a ball last?

DO: Optimally, the average player should get two sets from a ball. In tournament play and league play balls will typically be changed after every set.

PTM: What do you say to those who complain that balls should last longer?

DO: Over the years everyone who has entered the ball business, and there have been many, has tried to make a longer lasting ball. But think about what the ball must withstand. You have very gritty aluminum court surfaces, gritty paddle surfaces, and super-tight screens that act like knife-edges. Add weather conditions that go from zero degrees to seventy degrees, with rain and snow thrown in for good measure. Furthermore, the points today are lasting far longer than in the past. In tournament play, it is common to have points that last 30, 40, even 50 hits. Some might think that it is a miracle the ball lasts as long as they do.

PTM: And what do you say to those people who think that you just want to sell more balls?

DO: Of course I do, but selling a lousy ball does nobody any good. Regrettably, Viking produced a horrible batch of balls three seasons ago, just when I started with the company. Trust me, the few extra cases sold weren’t worth the tarnished reputation. The fact is that 10 years ago an average of 250,000 platform balls were sold a year. Today, the number is closer to 175,000 and the level of play hasn’t diminished. As a matter of fact, statistics show play has increased. That means the average ball is lasting longer.

PTM: That brings me to my next question. Do you know how ball sales in platform compare to tennis?

DO: In tennis, over one million balls are sold every single day of the year! Every four hours, more tennis balls are purchased than platform uses a year. Pretty remarkable.

PTM: One of the big questions about ball play is the high bounce in warm weather. Can anything be done to make the balls bounce lower?

DO: From a personal point of view, I would love to see a lower bouncing ball for tournament play. I think it would shorten the points and thus speed up play. But the fact is, for 90% of the players, the current ball is much better for them. Remember the V30 of old? You’d go out to play on a cold winter day and you would have better luck getting a rock to bounce than that ball. The ball shouldn’t be a hindrance to learning the game or playing it. Teaching others to play the screens is much more difficult with a lower bouncing ball The average player wants to hit the ball more than a couple of times in a point. They aren’t afforded that opportunity with rocklike balls.

DO: To be honest, the sales volume doesn’t support that many choices of balls. In addition, let’s face it, it’s the top player or tournament players at most clubs who decide what ball gets purchased for the club and used at club functions. If a lower bouncing ball is available, that’s what is going to be chosen by the top guys. The needs of the average player are going to get neglected. The only way to grow the sport is to cater to the average players, not the tournament players.

DO: We’re heavily involved in junior programs across the country. We sponsor the Viking Cup Child Adult tournament, the Viking Junior Tour, and are major contributors to the APTA Junior Nationals. Supporting juniors is a long-term investment. As for efforts that will result in more immediate growth, Viking was a founding sponsor and currently the sole sponsor of the PPTA. The teaching professionals are the key to growing the sport. Without their support, commitment, and enthusiasm, the sport languishes.

PTM: Viking went to the US Open this past August. How was it?

DO: We set up a booth at the Tennis industry Association Tennis Show that was held in conjunction with the Open at Flushing Meadows. And while I can’t say we had any direct converts to the game, we certainly had hundreds of visitors view the video that we had playing. We had lots of sales reps from other racquet sports companies stop by just to learn about the game. They had all heard the name “platform tennis,” but most had no idea what it actually was. I am hoping they were stopping by to learn about the sport rather than just stopping by to ask David Kjeldsen (CEO of Viking Athletics) about his ever-present Viking horn hat.

PTM: On to personal stuff, rumor has it that you played number one singles at Loyola College for four years. Is it true?

PTM: While in college were you playing platform also?

DO: I played a few tournaments here and there, but never had great success. I had a lot of fun and was fortunate enough to play President’s Cup on several occasions.

PTM: Speaking of successes, how does it feel to be platform’s current Men’s
Open Champion as well as the Husband/Wife National Champion?

DO: The Men’s Open was great; however, winning the Husband/Wife was the toughest challenge of my life. But that is officially off the record, right?
The 34-year-old Sales Manager for Viking Athletic and the 2003 APTA Men’s Open and Husband/Wife Champion discusses new paddles, the ball market, and recent media exposure for platform tennis.

David Ohlmuller was inducted into the Hall of Fame in 2013.

His playing career was impacted by a serious “hit and run” injury in 1996 while he was walking in Manhattan. His mother Ginna, who was the Executive Secretary of the APTA at the time, had to resign her position to help David with the extensive recovery process.