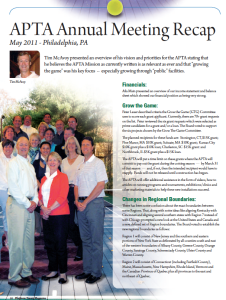 Financials:
Aila Main presented an overview of our income statement and balance sheet which showed our financial position as being very strong.

Grow the Game:
Peter Lauer described criteria the Grow the Game (GTG) Committee uses to score each grant applicant. Currently, there are 70+ grant requests on the list. Peter reviewed the six grant requests which were selected as prime candidates for a grant and/or a loan. The Board voted to support the six projects chosen by the Grow The Game Committee.

The APTA will put a time limit on these grants where the APTA will commit to pay out the grant during the coming season — by March 31 of that season — and, if not, then the intended recipient would have to reapply. Funds will not be released until construction has begun.

The APTA will offer additional assistance in the form of videos, how-to articles on running programs and tournaments, exhibitions/clinics and other marketing materials to help these new installations succeed.

Changes in Regional Boundaries:
There has been some confusion about the exact boundaries between some Regions. That, along with some ideas like aligning Kentucky with Cincinnati and aligning several southern states with Region 7 instead of with Chicago prompted a new look at the United States and Canada and a new, defined set of Region boundaries. The Board voted to establish the new regional boundaries as follows:

Region 1 will consist of New Jersey and the southern and eastern portions of New York State as delineated by all counties south and east of the western boundaries of Albany County, Greene County, Orange County, Saratoga County, Schenectady County, Ulster County and Warren County.

Region 2 will consist of Connecticut (including Fairfield County), Maine, Massachusetts, New Hampshire, Rhode Island, Vermont and the Canadian Province of Quebec plus all provinces to the east and northeast of Quebec.Region 3 will consist of Delaware, Maryland, Washington DC, Eastern Pennsylvania as delineated by the western boundaries of Centre County, Clinton County, Fulton County, Huntingdon County and Potter County and Northern Virginia as delineated by the southern boundaries of Fauquier County, Frederick County, King George County, Rappahannock County, Stafford County and Warren County.

Rules Committee:
Fritz Odenbach reported that the Rules Committee was not proposing any new rules or any significant changes to the existing rules with one exception of a rule clarification. Rule 18j deals with the ball hit so hard that, after bouncing in the opponent’s court and then rebounding off the back screen or corner comes back across the net to the hitter’s side — and where it was not touched by the opponent — results in a loss of point to the hitter regardless of whether the ball lands in or out on the hitter’s side of the net. The Rules Committee recommended that the sentence “This rule does not apply to the serve” be added at the end of Rule 18j as currently written. The Board approved this addition.

Women’s Players’ Committee:
The Board approved awarding national ranking points to women who finish in 34th place or higher in any ranking tournament.

PPTA:
The PPTA grew 20% last season (with 34 new members) and created six videos. Missy D’Alise will be the new Member Services Administrator and the PPTA will consider adding an umpire certification process when PPTA pros get certified. The Board voted to offer PPTA pros a $30 APTA membership that would be included with their annual PPTA dues.

Seniors:
Last year there were 14 senior events, all in Region 1. Courtia Worth and Tim Mangan will put together a Seniors Players’ Committee to continue to identify and reach out to seniors. This committee will focus on growing the senior game, re-evaluating the possibility of relocating some senior events to other regions, and
perhaps create a senior newsletter.

APTA Junior Tour:
Tom Safford and his committee will identify ways to continue to grow the junior game, including organizing clinics (working with the PPTA), producing brochures (How to: run a clinic/practice; build a junior program; and run a junior tournament). Possible equipment and/or rule changes similar to those in tennis will be reviewed by his committee.

Platform Tennis Magazine:
In order to improve the quality of the magazine and increase our input, the Board voted to create a Communications Director position, reporting to the Executive Director.

Website:
The website was redesigned this year to improve navigation and movement to microsites and has received much positive feedback. “Hot off the Wires,” the news email to members, was published 15 times. Videos and rules were the most popular topics. The new Tournament Scoring System was a great success, generating more than 3,800 unique visitors.