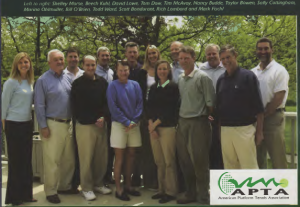 The APTA Board of Directors held its Annual Meeting and work sessions May 20-21, 2005, at the Glen View Club near Chicago. In addition to working through the usual tasks of scheduling next season’s tournaments, debating rule changes, and planning enhanced member services, the Board also took action on two especially exciting developments.

First, in a move designed to foster the growth of paddle in the South, the Board approved the creation of a new APTA region Region VII which is defined as Virginia (excluding Northern Virginia/metro Washington, DC) and south along the Atlantic Coast. The “deep South” has had active paddle communities for decades but in the past several years has seen an increase in number of players, court installations and participation by southern teams in APTA tournaments. Charlottesville, Richmond, Winston-Salem and Atlanta form the base of Region VII, with additional southern cities such as Chapel Hill and Greensboro considering installing courts.

Second, Chris Casiraghi and Jim Reilly of Reilly Green Mountain (RGM), a court manufacturing and maintenance firm, announced the Reilly Green Mountain Public Court Challenge. In an effort to support the APTAs initiatives to grow the game through municipal paddle, RGM is offering, on an annual basis, to install two courts at a deserving public facility for a no-cost trial period of two years. At the end of the two years the facility can purchase the courts or RGM will relocate them to another community.

Communities are invited to submit applications to be considered for the RGM Public Court Challenge. The deadline is February 1, 2006. RGM will announce the winning locale at the Nationals in Chicago in March 2006. You may obtain more information about the RGM Challenge on the APTA Web site.

Other highlights of the APTA Meeting include:

Tournament Play
• The 2005-06 tournament schedule was approved, featuring more than 115 APTA-sanctioned events from October through April.
• It is hoped that APTA-certified umpires will call all semi-finals and finals matches at next year’s open Nationals.
• B Nationals. The Board discussed the reasons why this relatively new event has not drawn teams nationally as well as who would be willing to host the event next year. Later in the spring the Board decided not to schedule the B Nationals in the 2005-06 season but to revisit the topic at the 2006 Annual Meeting.

Member Services
• A new web design firm was contracted to update and host the APTA web site. The site has been greatly improved and features easy navigation to a wealth of platform tennis information, APTA member services and downloads.
• The Board approved the creation of an APTA Associate Marketing Director position. The AMD will spearhead the APTA’s efforts to enhance member communications by posting
interesting and timely content on the APTA Web site over the course of the season.
• APTA-sponsored Exhibitions will continue this season. First up is Minneapolis on Saturday, October 22, followed by Norwich, VT/Hanover, NH, which is slated for Friday, November 4. Buffalo and Syracuse are also under consideration for exhibitions.
• A National Platform Tennis Center and Hall of Fame Museum is under consideration as a home for a Hall of Fame as well as a 4-8 court facility. Sites in Scarsdale, Greenburg, Darien, New Rochelle and Philadelphia are being considered. A final location is expected to be named by the Hall of Fame Committee by the end of the year.