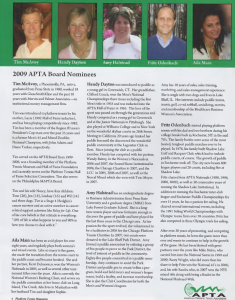 Tim McAvoy, a Phoenixville, PA, native, graduated from Penn State in 1980, worked 18 years with GlaxoSmithKline and the past 10 years with Marvin and Palmer Associates—an institutional money management firm.

Tim was introduced to platform tennis by his mother, 1992 Hall of Fame inductee Lucie Bel, and has been playing competitively since 1982. Tim has been a member of the Region III men’s President’s Cup team over the past 25 years and is a former Men’s 45 and Mixed Doubles National Champion, with John Adams and Diane Tucker, respectively.

Tim and his wife Nancy, have four children: Tom (20), Jen (18), Lindsay (16) and Wil (14) and three dogs. Tim is a Stage 4 Hodgkin’s cancer survivor and an active member in cancer-related support activities like Relay for Life. One of his core beliefs is that attitude is everything: “10% of life is what happens to you and 90% is how you choose to deal with it.”

[Read about the other nominees at left]