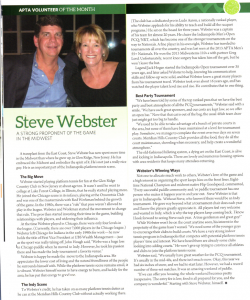 A Strong Proponent of the Game in the Midwest

A transplant from the East Coast, Steve Webster has now spent more time in the Midwest than where he grew up, in Glen Ridge, New Jersey. He has embraced the Midwest and embodies the spirit of it. He’s not just a really nice guy. He is an important part of the Indianapolis platform tennis scene.

Webster started playing platform tennis for fun at the Glen Ridge Country Club in New Jersey at about age ten. It wasn’t until he went to college at Lake Forest College, in Illinois, that he really started playing more. He joined the Chicago scene in its infancy, playing at the Onwentsia Club and was one of the masterminds with Rod Workman behind the growth of the game. In the 1980s, there was a “rule” that pros weren’t allowed to play in the league. Webster and Workman started the movement to change that rule. The pros then started investing their time in the game, building relationships with players, and widening their influence.

At the time Webster played in Chicago, there were only four levels in the league. (Currently, there are over 7,000 players in the Chicago league.) Webster left Chicago for Indiana in the early 1990s for work—he now holds the title of First Vice President at UBS Wealth Management—just as the sport was really taking off. John Hough said, “Webo was a huge loss to Chicago paddle when he moved to Indy. However, he took his passion there and has made the Indy tournament a favorite venue.”

Webster is happy he made the move to the Indianapolis area. He appreciates the lower cost of living and the natural friendliness of the people he surrounds himself with. While the platform tennis scene remains small, it is vibrant. Webster himself seems to have energy to burn, and luckily for the area, he has put that energy to good use……[click on the image to read more]