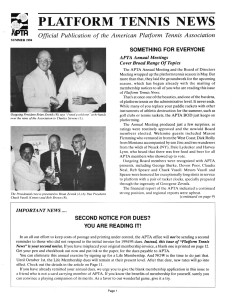 Platform Tennis News covered the changing of the guard

Remarks by Stephens upon taking over the reins from Zevnik:

“Generally, the first obligation of a new president is to promulgate laudatory remarks about the accomplishments of his predecessor. As 1 ascend to the presidency, that obligation is twofold and it is not really an obligation, but an ancillary privilege for me to have this opportunity to personally thank, publicly, Brian Zevnik, for his achievements during his term of office as president, and to abundantly heap accolades on our retiring past president, Chuck Vasol!.

Without Chuck and Brian heading our organization during the frightening period of paddle decadence, I might not have this opportunity to serve you as president. Their achievements over a six year period have placed paddle in the order of proper ascendancy and will now give me an opportunity to continue their achievements in growth and in contribution to our paddle membership. Chuck has led us from a period of corporate insolvency to the threshold of breaking the $100,000.00 eq uity position. His achievements are even more monumental when one considers that his achievements administratively were coupled with both a qualitative and quantitative increase in paddle competition.

Brian has taken Chuck’s accomplishments one step further and has led us to our current achievement in the Lineal Group Grand Prix competitions, has broken the barrier of 3,000 in individual memberships, and projected the Platform Tennis News and Update into periodicals anxiously anticipated by all members.

Chuck and Brian will be a tough act to follow and I will rely on their experience and guidance to advance the APTA one step higher on the ladder of competitive sports.

We will hope to take the first forward steps towards the accomplishment of a National Platform Tennis center in Westchester County, NY. We will also look to surpassing the 5,000 membership goal which will help to give us the visibility requi red to achieve many of the goals ordained by the future directions committee.

The progress that the APTA has made under the guidance of Brian and Chuck cannot now lay dormant. But through the communication among a ll the members who will be counted on to contribute their ideas and labor, we will continue to progress toward making the greatest sport in the world recognized as just that. particularly by the corporate heads who will be asked to become part of the paddle world through their participation in national events.

This year’s Board of Directors is an accomplished group of the composite paddle player, all of whom are driven by the desire to improve the game for the benefit of all players.

Each member of the Board will be receptive to the ideas expressed by all of our members and we are open to your suggestions for any improvement to this game and its administration.”