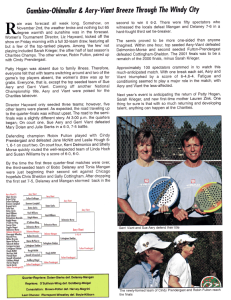 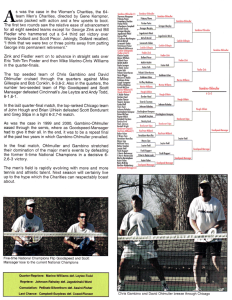 Women’s Charities:
Rain was forecast all week long. Somehow, on November 2nd, the weather broke and nothing but 65 degree warmth and sunshine was in the forecast. Women’s Tournament Director, Liz Hayward, kicked off the show on Friday morning with a full 32-team draw, featuring all but a few of the top-ranked players. Among ‘the few’ not playing included Sarah Krieger, the other half of last season’s Charities Champs. The other winner, Robin Fulton, paired up with Cindy Prendergast.

Patty Hogan was absent due to family illness. Therefore, everyone felt that with teams switching around and two of the game’s top players absent, the women’s draw was up for grabs. Everyone, that is, except the top seeded team of Sue Aery and Gerri Viant. Coming off another National Charities takeover.

Director Hayward only seeded three teams; however, five other teams were placed. As expected, the road traveling up to the quarterfinals was without upset. The road to the semifinals was a slightly different story. At 3:00 p.m. the quarters began. On court one, Sue Aery and Gerri Viant defeated Mary Doten and Julie Sierks in a 6-3, 7-5 battle.

By the time the first three quarterfinal matches were over, the third-seeded team of Bobo Delaney and Tonia Mangan were just beginning their second set against Chicago hopefuls Chris Sheldon and Sally Cottingham. After dropping the first set 7-5, Delaney and Mangan stormed back in the second to win it 6-2. There were fifty spectators who witnessed the locals defeat Mangan and Delaney 7-6 in a hard-fought third set tie-breaker.

The semis proved to be more one-sided than anyone imagined. Within one hour, top seeded Aery-Viant defeated Delmonico-Morse and second seeded Fulton-Prendergast defeated Cottingham-Sheldon. The 2001 finals was to be a rematch of the 2000 finals, minus Sarah Krieger.

Approximately 100 spectators crammed in to watch this much-anticipated match. With one break each set, Aery and Viant triumphed by a score of 6-4,6-4. Fatigue and conditioning seemed to play a major role in the match, with Aery and Viant the less-affected.

Next year’s event is anticipating the return of Patty Hogan, Sarah Krieger, and new first-time mother Lauren Zink. One thing for sure is that with so much returning and developing talent, anything can happen at the Charities.

Men’s Charities
As was the case in the Women’s Charities, the 64- team Men’s Charities, directed by Gene Kempner, was packed with action and a few upsets to boot. The first two rounds saw the relative ease of advancement for all eight seeded teams except for George Zink and Bill Fiedler who hammered out a 6-4 third set victory over Wayne Dollard and Scott Pecor. Jokingly, Dollard recalled, “I think that we were two or three points away from putting George into permanent retirement.”

Zink and Fiedler went on to advance in straight sets over Eric Toth-Tim Foster and then Mike Marino-Chris Williams in the quarterfinals.

The top seeded team of Chris Gambino and David Ohlmuller cruised through the quarters against Mike Gillespie and Bob Conklin, 6-3,6-2. Also in the quarters, the number two-seeded team of Flip Goodspeed and Scott Mansager defeated Cincinnati’s Joe Leytze and Andy Todd, 6-1,6-1.

In the last quarterfinal match, the top-ranked Chicago team of John Hough and Brian Uihlein defeated Scott Bondurant and Greg Stipa in a tight 6-2,7-6 match.

As was the case in 1999 and 2000, Gambino-Ohlmuller eased through the semis, where as Goodspeed-Mansager had to give it their all. In the end, it was to be a repeat final of the past two years in which Gambino-Ohlmuller prevailed.

In the final match, Ohlmuller and Gambino stretched their domination of the major men’s events by defeating the former 5-time National Champions in a decisive 6- 2, 6-3 victory.

The men’s field is rapidly evolving with more and more tennis and athletic talent. Next season will certainly live up to the hype that the Charities can respectably boast about.