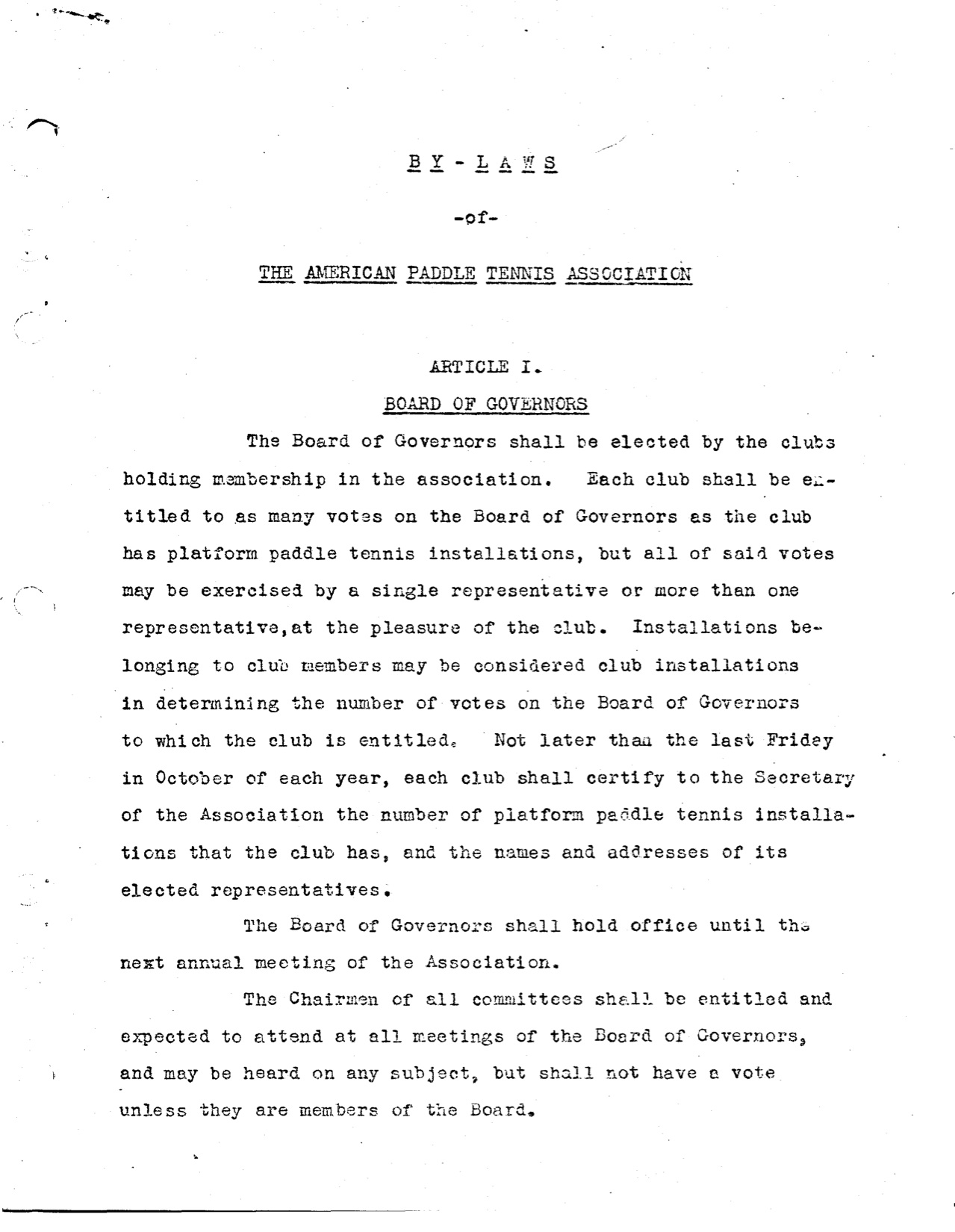 Manursing Island Club of Rye, New York, was an early adopter of the game after a somewhat skeptical committee of two came to Scarsdale to try out the sport at the court on Old Army Road. After trying out the game, the discussion changed from whether to put in a court to how many. They made a decision to install two courts and two additional ones shortly after. Not long after, Manursing member John C. (Jack) Ten Eyck Jr., took the initiative in founding the American Platform Tennis Association (APTA)— first called the American Paddle Tennis Association. Initial members came from Fox Meadow, Manursing and Greenwich Field Clubs.

In November 1934, Ten Eyck called the inaugural meeting of the APTA in his office in New York City. Representatives of three clubs that had been pioneers in the establishment of platform tennis courts were invited: Fox Meadow Tennis Club of Scarsdale, New York, the Manursing Island Club of Rye, New York, and the Field Club of Greenwich, Connecticut. Warren A. Ransom, and Grenville S. Sewall represented Manursing; Foster M. Hampton represented the Field Club; and Fessenden S. Blanchard represented Fox Meadow. All five signed the original charter.

The charter provided that meetings of member clubs were to be held at least once a year on the last Friday in October. Each installed platform entitled a member to one vote. However, there was a special provision stating that “courts belonging to club members may be considered club courts for voting purposes.” This was suggested because of the fact that in some communities, as in Scarsdale and Greenwich, many privately owned courts had been made available for Association championships and play by club members. At the time the Association was organized, the Fox Meadow Tennis Club and the Field Club at Greenwich each had only two courts compared to six at Manursing Island. However, the total number of platforms belonging to club members in the two former places was relatively large. The Manursing men generously made the proposal for this clause in the interests of fairness.

One of the earliest steps to grow the game, was to send a reprint of an article in Squash-Badminton about platform tennis, and an announcement about the formation of the APTA to clubs belonging to the Eastern Lawn Tennis Association

1.     How can we improve the type of back net to get a larger percentage of accurate bounces off it? [This was sent a short time prior to the development of the Evans backstop on the Cogswell platform.]
2.     Do you favor the present practice of allowing one serve only? [All replies but one favored one serve.]
3.     Are the present court measurements about right? For instance, would a 2.5-foot alley, instead of the present 2 feet, improve the game, without changing the service or singles court? [No change was suggested at the time.]
4.     We are attempting to standardize the height of the net, which is now 3 feet at the posts with no regular height at the center. What do you think of 2’10″ at the center—or do you prefer some other height? Many nets now sag to 2’8″ or 2’9″ at center. [The 2'10" was decided on, with, not over 3'1" at the posts. This still remains the standard.]
5.     Have you any other suggestion of any kind on rules or equipment, or on any other matter?