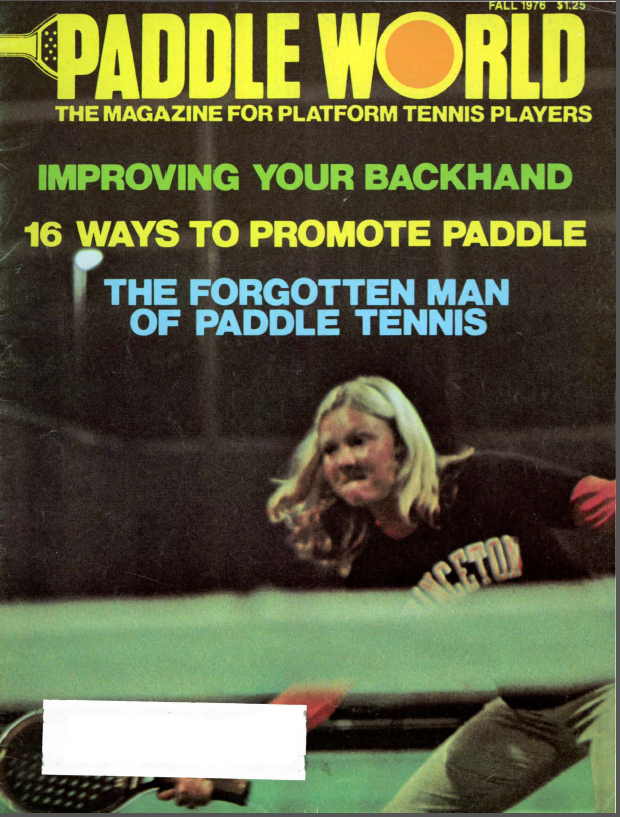 An article on Contessa by Vicky Cosstick appeared in in Paddle World, Vol. 1 No. 5, Fall 1976

In the article John Ware, Blanchard’s son-in-law, referred to him as the ‘missing link” between paddle tennis and platform tennis as Contessa who developed, manufactured and promoted the paddle tennis racket, net and balls which Blanchard and Cogswell bought in a New York store.

Through his church activities, Contessa met the Rev Frank Beal whose boys were playing street paddle with crude saw-cut bats, and in 1922 Contessa left his Wall Street career to form with Beal, the American Paddle Tennis Assoc. with the aim of marketing the game and equipment specifically for under-privileged youth.

Contessa began with the financial backing of Wall Street colleagues, and space donated by his brother Joseph in the basement of a yarn warehouse at 131 Spring St. (in what is now called SoHo, Manhattan). The first equipment consisted of a carrying case, nets, stanchions, paddles and balls for two or four players: ” A Complete Outfit at the Cost of One Standard Tennis Racquet: $10.00 “. A later version included tape and staples to mark out the court. In designing the equipment,

Contessa gave primary consideration to cost, portability, and flexibility. The stanchions for net-posts were made especially to be collapsible and the ” airball” (sponge rubber) was designed to bounce on an irregular surface, large enough so that a child would see it coming over the net easily. The paddles were made of plywood.

Over the period between 1922 and 1926, Contessa set about marketing the game in a systematic fashion. ” I thought it would take two years,” he says, ” but it took four.”

In 1926, the G. Lynn Sumner Co. , a Madison Avenue advertising company, offered to buy the Paddle Tennis Co., and the directors, including Doc Beal, agreed. Frank Contessa was outvoted. His concern was that the new owners would up the price of the equipment and redirect it to the more wealthy set.

He left the world of paddle tennis and went onto other ventures. But his predictions were correct. Not only did the equipment become more and more costly, but the game was taken up by two Scarsdale players named Blanchard and Cogswell,who, not satisfied with playing the game just anywhere, and with the resources to develop a more sophisticated game, built a platform and had the idea of playing the ball off the wires.