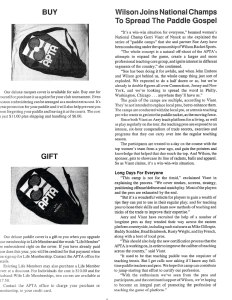 The concept was a natural offshoot of the APTA attempts to expand the game.

“It’s a win-win situation for everyone,” beamed women’s National Champ Gerri Viant of Nyack, as she explained the series of “paddle camps” that she and partner Sue Aery have been conducting under the sponsorship of Wilson Racket Sports. “The whole concept is a natural off-shoot of the APTA’s attempts to expand the game, create a larger and more professional teaching core group, and ignite interest in different segments of the country,” she continued. “Sue has been doing it for awhile, and when John Embree and Wilson got behind us, the whole camp thing just sort of exploded. We expected to do a half dozen or so, but we’re already in double figures all over Connecticut, Jersey and New York, and we’re looking to spread the word in Philly, Washington, Chicago … anywhere they’ll have us.”

” The goals of the camps are multiple, “according to Viant. “They’re not intended to replace local pros, but to enhance them. The camps are conducted with the local pro, or a tennis teaching pro who wants to get into the paddle racket, as the moving force.” Since both Viant and Aery teach platform for a living, as well as play regularly on the tour, the teaching pros are exposed to an intense, six-hour compendium of trade secrets, exercises, and programs that they can carryover into the regular teaching season. The participants are treated to a day on the course with the top women’s team from a year ago, and gain the pointers and knowledge that helped that duo reach the top. And, Wilson, the sponsor, gets to showcase its line of rackets, balls and apparel. So as Viant claims, it’s a win-win-win situation.