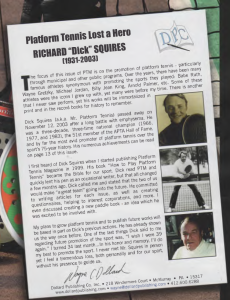 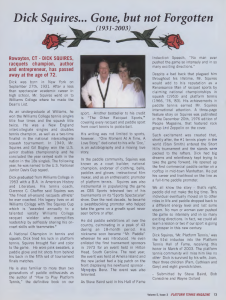 Dick Squires (a.k.a. Mr. Platform Tennis) passed away on November 12, 2003 after a long battle with emphysema.

The following is an excerpt from the article Dick Squires… Gone, but not Forgotten that appeared in Platform Tennis Magazine, Vol. 5 Issue 3

A National Champion in tennis and squash, Dick tried his luck in platform tennis. Squires brought flair and color to the game. He wore pink sweaters, a paddle glove and hit shots from behind his back in the fifth set of tournament finals matches.

He is also familiar to more than two generations of paddle enthusiasts as the author of “How to Play Platform Tennis,” the definitive book on our sport. Another bestseller to his credit is “The Other Racquet Sports,” covering every racquet and paddle sport from court tennis to pickle-ball.

His writing was not limited to sports, however. “One Moment At A Time, A Love Story,” dedicated to his wife ‘Doc,’ is an autobiography and a moving love story.

In the paddle community, Squires was known as a court builder; national champion; endorser of clothing, balls, paddles and gloves; instructional film maker, and as an enthusiastic promoter of platform tennis. Squires was also instrumental in popularizing the game as CBS Sports televised two of his tournaments on its “Sports Spectacular” show. Over the next decade, he became a swashbuckling promoter who helped take the game on a growth spurt never seen before or after.He was a three-decade, three-time national champion (1966, 1977, and 1983), the 51st member of the APTA Hall of Fame, and by far the most avid promoter of platform tennis over the sport’s 75-year history. [read complete article at left]