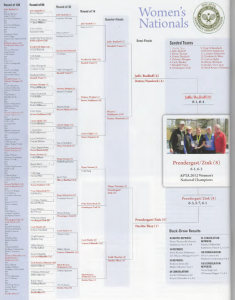 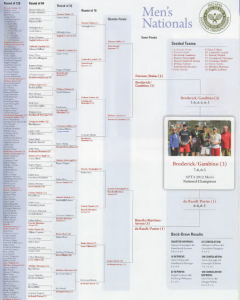 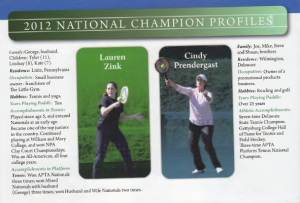 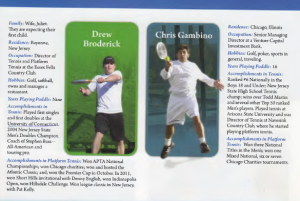 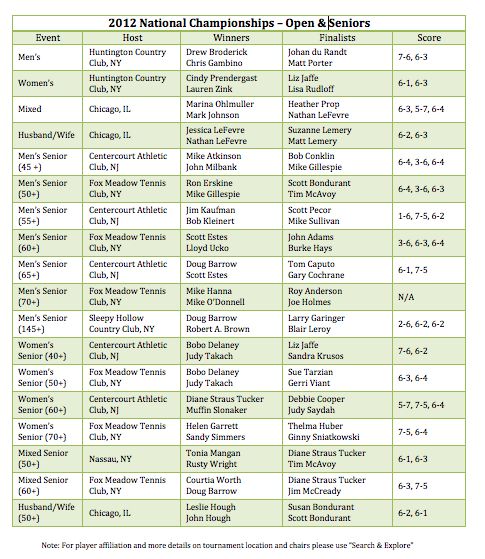 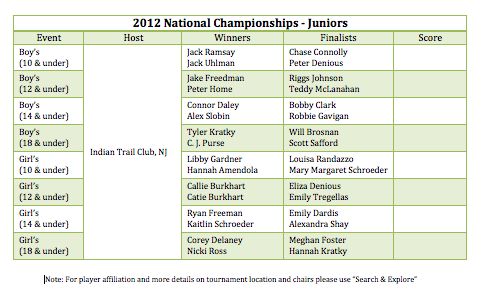 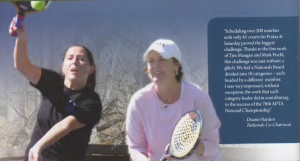 Last year, Lauren Zink and Cindy Prendergast plowed through the APTA National Championships, in Chicago, without dropping a set. Concluding her victory speech in 2011,
Prendergast said, “Lauren and I look forward to next year and trying to repeat.” And repeat they did.

On March 15th, 80 women’s teams, from coast to coast, came out to compete in the 2012 APTA National Championships on Long Island. For the seventh time in the past eight seasons, Zink and Prendergast found themselves battling in the finals for the National Championship.

All of the 16 women’s seeded teams reached the round-of-16. Seven of those top eight reached the quarterfinals; newcomers Ana Brzova and Viktoria Stoklasova took out the veteran eighth-seeds Bobo Delaney and Tonia Mangan. The ladies were playing with emotion as Bobo’s mother (and Tonia’s mother-in-law), paddle legend Nancy Mangan, passed away the day before.

The women’s quarterfinals featured the 8th-seeded Zink and Prendergast knocking off 3rd-seeded Kerrith Flynn and Susan Tarzian. Although they were reigning National Champions, Zink and Prendergast were seeded eighth because Women’s finalists Liz Jaffe and Lisa Rudloff scramble against the National Champions they didn’t compete together in any other tournaments this season.

Three of the four semifinalists were repeats from 2011: Lauren Zink and Cindy Prendergast, Liz Jaffe and Lisa Rudloff, and Mary Doten and Chelsea Nusslock. The fourth team to round off the semis was the top-seeded pairing of Amy Shay and Cynthia Dardis who set the season on fire.

The semifinal between the top-seeded team and the defending National Champions proved to be the match of the weekend. Dardis and Shay showed why they deserved the right to be first seeds, while Zink and Prendergast showed how they earned three Open National Championships (two together and one as Prendergast-Hogan in 1999).

Zink and Prendergast were up on Dardis 6-3, 5-3, but the top seeds fought back to take the second set 7-5. It was the only set Zink and Prendergast were to lose, as they rebounded and took the third set 6-1. After the match, Prendergsat said, “Our toughest match was against Dardis and Shay. They just never stop fighting. They’re a team that you never feel comfortable being ahead against”

The repeat finals from 2011 was played on Sunday at the Huntington Country Club. In platform tennis, sometimes it’s about match-ups. It appears that this one points in favor of Zink and Prendergast. At 6-1, 6-3, the score of the final match was similar to last year’s final (6-2, 6-1). While Zink and Prendergast may never be ranked number one, they sure play like they are number one.

The 22-and-0 season was the first time in nearly a decade that a team achieved the feat.

The perfect season began October 14th, 2012 at the Scotio Country Club in Columbus, Ohio. Playing together for the first time, Drew Broderick and Chris Gambino went 5-and-0 against the top teams in the country, winning the Premier Cup and $2,800 cash. They repeated their success at the Atlantic Classic (4-0), the Chicago Charities (6-0) and then the National Championships (7-0). The 22-and-0 season was the first time in nearly a decade that a team achieved the feat (Gambino did so with David Ohlmuller in the 2001-02 season).

The men’s Nationals began at 1 p.m. on Friday, March 16. Broderick and Gambino, although entering with a perfect season in hand, were seeded third behind the 2011 Nationals Champions Mike Stulac and Mark Parsons (2nd seeds) and finalists Johan du Randt and Matt Porter (1st seeds).

The draw went smoothly with the top eight seeds advancing to the quarter-finals. (See page 25 for full draw.) Showing the depth of new faces in the men’s draw, 7 of the 16 men reaching the APTA Nationals quarterfinals did not do so in 2011.

In their quarter-final, Broderick/Gambino came up against 6th-seeds Steve Derose and Jon Lubow. It was another match where the undefeated teamstayed steady and pounced only when the time was right. They won at 6-2, 6-2, another match that didn’t go into a third set. Good thing for the undefeated team, because the Sunday semifinals was another story.

On a warm, beachy kind of day, on Court 2, du Randt and Porter defeated Arraya and Bancila 6-4, 6-3. On the neighboring semi-final court, Broderick and Gambino had their hands full with the defending National Champions. Parsons and Stulac took the first set 6-3 but Gambino and Broderick dug deep. They lengthened the points and played a more traditional paddle match punctuated with winners just when they needed them. After three-and-a-half hours Broderick and Gambino prevailed by 3-6, 6-4, 6-3.

Due to the length of that semifinal, the Men’s Nationals final was pushed back about an hour. Everyone guessed that Broderick and Gambino would be gassed. But they showed their mettle as they defeated du Randt and Porter 7-6 (4), 6-3. In the end, Broderick and Gambino dominated the entire 2011-12 season and showed everyone in the sport why they deserve to be called National Champions.