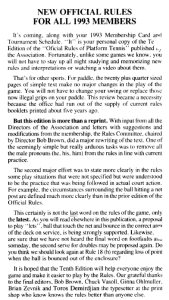 The new edition was more than a reprint of existing text. With input from all the directors of the Association, and suggestions from members, Rules Committee, Director Bob Brown did a major rewriting of the text.

One of the seemingly simple, but really arduous tasks was to remove all the male pronouns (he, his, him) from the rules, in line with current practice.

The second major effort was to clarify rules for certain play situations that were not specified, but were understood to be accepted practice in actual court action. For example, the circumstances surrounding the ball hitting a net post were defined much more clearly than in the prior edition of the Official Rules.