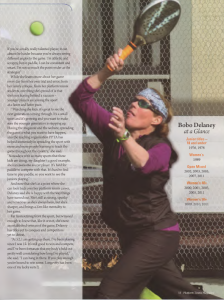 Whenever there’s a national tournament to be played, you can usually count on Bobo Delaney’s name somewhere in the winner’s circle. This year, she took National titles for the Women’s 40+, 50+ and Open Mixed.

Despite tying the record for five Mixed Nationals titles and a lifetime of winning that began with her first Junior Nationals in 1976, Delaney said she still gets nervous when she walks into the wires for tournament play.

“You definitely still get nervous. Some days are better than others. I’ve competed my whole life in other sports, and I used to get more nervous when I was younger. There’s the pressure to win, then the pressure of being a Mangan, with the family being good in the sport,” she said. “I’ve gotten better at controlling that. The nerves are still there, but by playing a lot and competing, you just get better at managing it -controlling it. There’s always pressure, and there’s always nerves!’

While she downplays the family pressure associated with playing platform tennis by talking about how supportive everyone is when it comes to her playing, especially her parents, who have been her mainstay over her career, competition among family is ever-present.

“We’ve always been a competitive family, and that’s been great,” she said. “Sometimes they like to tell you what to do, especially my Dad. Everybody’s got a better strategy than the next guy.”

Knowing whose strategies to follow in a family of champions can be daunting: Delaney’s mother, Nancy Mangan, is a member of the Platform Tennis Hall of Fame. Her uncle, John Mangan, shares the same distinction, and her brother, Tim Mangan, is a member of the APTA Board of Directors. Delaney’s daughter, Corey, has five Junior Nationals titles under her belt and was featured in Sports Illustrated as an up-and-comer in the sport.

Surrounded by all of that talent, Delaney said that as a child, while she hoped to be at her uncle’s level of play at some point, it was Hank Irvine who was her biggest influence in the game. “[Irvine] was my source for learning and enjoying the game,” she said. “He taught me my backhand volley, which is the best part of my game.”

Like anyone with a considerable talent, Delaney teaches her skills to others. She’s been a paddle pro for more than 20 years and loves teaching the game and spreading her enthusiasm, knowledge and experience. She is a PPTA Certified Pro and has taught all over New Jersey.

On the court, Delaney wants frigid temperatures and lots of wire-play. If she gets her annual wish for a cold March at Nationals, she’s in her element.

“I’m a cold weather player. I play my best in January and February. When it’s colder, the ball chills and stays lower; that’s better for my game. The winters don’t tend to be cold long enough these days, and the ball has a tendency to bounce out of the court when it’s warm,” she said. “The game is faster than it used to be. The ball is hit harder and it’s more bouncy than way back. So, bouncing out of the court is a problem when it’s warm. That, and trying to keep the volleys in.”

If the weather complies, then opponents of Delaney, and her regular partner, sister-in-law Tonia Mangan, face one of the best female teams out there. The duo have been steady partners for more than 18 years, and, Delaney said, has been “unbelievably rewarding.” “I’m more of a purebred paddle player, opposed to a tennis player learning paddle. Between Tonia and myself, you’re looking at two of the best wire players in the game. We can get 95 percent of the wires. They just aren’t a factor for us.” Delaney said. “I feel like I’m a great partner. I’ve played for so long, and I’m a team player. I know my role on the court, am a good strategist and good competitor. I’ve played a lot, and I have good partners. A great part of playing doubles and being successful is to find a way to get the best out of your partner. Most people only think about themselves and what they need to do individually, but connecting with your partner and focusing on how to bring out their strengths and confidence is a major factor in winning and what makes paddle a team sport and so much fun to play. I feel I am good at that, and that has been shown by winning with many different partners over the years:’

As far as her own game, Delaney said she’s always changing her style of play. “My game has changed over the years. I’ve gotten a lot smarter and, I’d say, physically, I’ve gotten better too and am much more consistent. Certainly, something that I could be better at is being more offensive. I tend to pick excellent partners. I compete much better than when I was younger,” she said. “I’m very good at concentrating on my strengths and trying to exploit others’ weaknesses. If you’re a really, really talented player, it can almost be harder because you’re always seeing different angles to the game. I’m athletic and scrappy, but in paddle, I can be consistent and smart. I’m not so much the point-ender as the strategist.”

While she learns more about her game every day from her own trial and error, from her family critique, from her platform tennis students, one thing she’s proud of is that she’s not leaving behind a vacuum – younger players are joining the sport at a faster and faster pace.

“Watching the kids, it’s great to see the next generation coming through. It’s a small sport and it’s growing and you want to make sure the younger generation is stepping up. Having the magazine and the website, spreading the game is what you want to have happen, also the teaching organization PPTA has helped immensely in spreading the sport with more and more people learning to teach the game throughout the country,” she said. “Nowadays with so many sports that these kids are doing, my daughter’s a good example, she’s an awesome soccer player. It’s hard for paddle to compete with that. It’s hard to find time to play paddle, so you want to see the juniors playing.”

And now that she’s at a point where she can look back over her platform tennis career, Delaney said she is happy with the way things have turned out. She’s still as strong, spunky and tenacious as she’s always been, but she’s sharper, and brings a Zen-like mentality to her game.

Far from retiring from the sport, but wizened enough to know that, like it or not, she’s now an established veteran of the game, Delaney has titles yet to conquer and competitors yet to defeat.

“At 52, I am getting up there. I’ve been playing since I was 12. It’s still good to win and compete, and I’ve been fortunate that my body’s held out pretty well considering how long I’ve played,” she said. “I can hang in there. If you play enough you’re bound to win some. Longevity has been one of my lucky suits.”