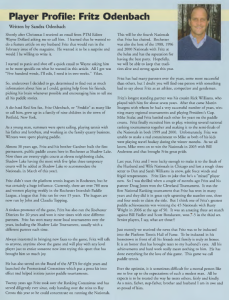 Shortly after Christmas I received an email from PTM Editor Wayne Dollard asking me to call him. I learned that he wanted to do a feature article on my husband Fritz that would run in the February issue of the magazine. He wanted it to be a surprise and would I be willing to write it.

I started to panic and shot off a quick email to Wayne asking him to be more specific on what he wanted in this article. All I got was “Five hundred words, I’ll edit, I need it in two weeks.” Yikes.

So, undercover I decided to go, determined to find out as much information about him as I could, getting help from his friends, picking his brain whenever possible and encouraging him to tell me all his paddle stories.

A die-hard Red Sox fan, Fritz Odenbach, or “Freddie” as many like to call him, grew up in a family of nine children in the town of Penfield, New York.

As a young man, summers were spent sailing, playing tennis with his father and brothers, and working in the family quarry business. Winters were spent playing paddle.

Almost 30 years ago, Fritz and his brother Gardner built the first permanent, public paddle courts here in Rochester at Shadow Lake. Now there are twenty-eight courts at eleven neighboring clubs, Shadow Lake having the most with five (plus three temporary courts will be added at Shadow Lake to accommodate the Nationals, in March of this year).

Fritz didn’t start the platform tennis leagues in Rochester, but he was certainly a huge influence. Currently, there are over 700 men and women playing weekly in the Rochester Interclub Paddle League, a league that Fritz ran for over 15 years. The leagues are now run by John and Claudia Topping.

A tireless promoter of the game, Fritz has also run the Rochester Districts for 20 years and won it nine times with nine different partners. Fritz has won many more local tournaments over the years, including the Shadow Lake Tournament, usually with a different partner each time.

Always interested in bringing new faces to the game, Fritz will talk to anyone, anytime about the game and will play with any level player just to entice someone new into trying this sport that has brought him so much joy.

He has also served on the Board of the APTA for eight years and launched the Promotional Committee which put a press kit into effect and helped initiate junior paddle tournaments.

Twenty years ago Fritz took over the Ranking Committee and has served diligently ever since, only handing over the reins to Ray Crosta this year so he could concentrate on running the Nationals.

This will be the fourth Nationals that Fritz has chaired. Rochester was also the host of the 1988, 1996 and 2000 Nationals with Fritz at the helm and has the reputation for having the best party. Hopefully, we will be able to keep that tradition alive and strong again this year.

Fritz has had many partners over the years, some more successful than others, but I doubt you will find one person with something bad to say about Fritz as an athlete, competitor and gentleman.

Fritz’s longest standing partner was his cousin Rick Williams, who played with him for about seven years. After that came Martin Sturgess with whom he had a very successful number of years, winning many regional tournaments and playing President’s Cup. Mike Stulac and Fritz battled each other for years on the paddle courts. Fritz finally recruited him to play, winning several national ranking tournaments together and making it to the semi-finals of the Nationals in both 1999 and 2000. Unfortunately, Fritz was unable to make a real commitment to Mike as both of his kids were playing travel hockey during the winter months. As we all know, Mike went on to win the Nationals in 2005 with Bill Anderson and that brought Fritz great pride.

Last year, Fritz and I were lucky enough to make it to the finals of the Husband and Wife Nationals in Chicago and lost a tough three setter to Dan and Sarah Williams in snow, gale force winds and frigid temperatures. Fritz likes to joke that he’s a “mixed” player now. So I was thrilled when a couple of months ago Fritz and his partner Doug Jones won the Cleveland Tournament. It was the first National Ranking tournament that Fritz has won in many years and they did it in great style upsetting the number one, three and four seeds to claim the title. But I think one of Fritz’s greatest paddle achievements was winning the 45 Nationals with Rusty Wright in 2006 at the age of 50. It was an amazing three set match against Bill Fiedler and Scott Bondurant, won 7-5 in the third set. Senior players, I say, what are those?!

Just recently we received the news that Fritz was to be inducted into the Platform Tennis Hall of Fame. To be inducted in his hometown in front of all his friends and family is truly an honor. It is an honor that has brought tears to my husband’s eyes. All his achievements and hard work really mean nothing to him. He has done everything for the love of this game. This game we call paddle tennis.

Ever the optimist, it is sometimes difficult for a mortal person like me to live up to the expectations of such a modest man. All he expects is to be treated the way he treats others, fairly and kindly. As a man, father, step-father, brother and husband I am in awe and so proud of him.

Fritz Odenbach was inducted into the Hall of Fame in 2008