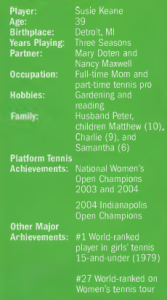 Susie Keane was born in Detroit, MI, 39 years ago. Growing up, she had a natural talent for tennis. Susie made the pro tennis circuit in 1980 after being ranked the #1 junior girl tennis player in the world (PTM mistakenly said “the #1 girls’ 15-and-under player in the world”)1. She competed on the tour until 1988, earning a ranking as high as #27 in the world.

Enjoying her tennis retirement by raising her three children, Susie was coaxed into a paddle game three years ago when her husband’s partner (her brother) failed to show up for a Saturday morning game. “My first game was very frustrating, but I liked it,” she recalls. “Playing that first match got me interested and when my friend Nancy Maxwell called me to play in a follow-up game I was excited. Nancy had been trying to get me out there for years,” she added.

Susie moved to Chicago shortly after that first game. She explained, “The Chicago girls were a great inspiration to me. I was fortunate to start off with such a supportive group.” In Chicago, Susie partnered with Mary Doten after Mary’s long-time partner Julia Sierks ended the 2002- 03 season early due to a family illness. She explained, “Mary is a great partner for me because we compliment each other’s games well. I love playing with Nancy Maxwell as well.” Susie also credited Ray Murphy and Jeff (Dr. Detroit) Hodges as great inspirations to her game.

All year long, Susie keeps an active agenda. She does yoga once a week and plays tennis in the summer. “I eat well all of the time and try not to push my physical limits. The important thing is to be healthy and fresh. I’ve seen too many injuries in tennis when people over-train. In the season, I’ll play paddle three times per week, but I switch back to tennis with the change to spring. I have to say that the tennis court does seem to be getting bigger and bigger these days,” she noted.

Susie accredited that tennis has made her a quickly-accomplished paddle player because “the racquet skills transfer.” She added, “To get better, I need to play more – experiment more. I need to mix up the overheads and add drop shots like the men do. If they can do it, it motivates me to try to add that dimension to the women’s game.” She added, “I also want to work on blitzing the net from the baseline. People who watch me think that I have a tough return of serve, but the fact is that it is effective because my partner blitzes the net and puts away the first volley. I would like to do the same for her.”

When asked her feelings about winning the APTA Women’s Open Nationals for the second consecutive year she said, “The first year, Mary and I weren’t expecting anything. Nobody knew us and we had the element of surprise. This year, we felt that we worked through our early seasonal losses and that we were a better team than we were last season. We also felt that many teams were gunning for us. This season’s Nationals victory was more satisfying than last season’s because we had to play harder. It was really awesome getting to play Sue and Gerri in the finals. You can’t ask for more than that.” Susie concluded, “We are truly out there just to have a good time… Winning is a bonus. We’ll be back next year, but our goal is still just to have a good time.”

Note 1: Correction made in 2014 after induction of Keane into Hall of Fame (personal communication from Keane)