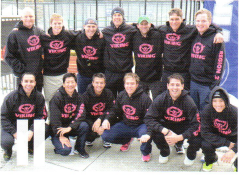 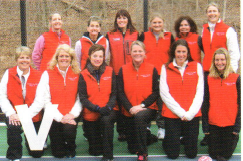 The President’s Cup kicked off the festivities at Nationals, with teams of men and women wearing matching outfits and vying for bragging rights for their region. For the women, Region V—the Chicago and Midwest crew—pulled out a victory over the always tough Region III—the Mid-Atlantic group from the Pennsylvania and Washington, DC, area. For the men, Region II held strong throughout the day and prevailed over the Region VIII team.

Region V Captain Lisa “Goldy” Goldberg said it best. “President’s Cup is our day, and Nationals is gravy.” This year’s President’s Cup, played on Thursday, March 6, filled the courts in Pittsburgh with the best men’s players and most of the top women athletes. Walking from court to court—at Sewickley YMCA or Allegheny Country Club—where the women competed, or at the Fox Chapel Racquet Club and Pittsburgh Field Club where the men were stationed—the level of play was astonishing.

Goldberg stated, “Fifty percent of us had played together before. Then we had some new blood for the other fifty percent. It was very strategic – one of the benefits of our team, we had Mary Doten and Chelsea Nusslock at the top. They were ranked ninth going in, so that was great. [Editor's note: The top eight nationally ranked teams were not allowed to compete in the women's PC.] We had a lot of depth. We had the capability to mix it around, and we did that a lot. Everyone knew going in that we wanted to win but I was going to make it fair. Region I and II are typically strong year after year. We did not think for sure that we were a shoe-in.”

Christi Hays, the 2014 Women’s President’s Cup Director, concurred, “The level of play across the board is just stronger. The group from California is getting better, the group from down South is becoming more competitive. There aren’t any weak links anymore.”

Regarding the team wear, Region V were easy to find in their red vests. Region III, led by Karin Kochis, rocked their dark pink fleece jackets. Region I won for being the fuzziest.

The competition was both fierce and fun. Teams had from 10-13 players and they rallied around each other. While many Nationals partners played on the same team, they weren’t always paired up for the President’s Cup matches. Combinations were often strategic and sometimes just plain neat—Laurie Hissey and Ali Tross (Region III) were a future mother-in-law and future daughter-in-law combo.

The women’s final was played under the lights, well after the men’s final had wrapped up. It was a long day of play but completely worth all the time, effort, and teamwork. “I’ve played in it before and I know what an important part of Nationals it is,” Hays concluded.

On the men’s side, Region II—New England—was rather dominant, losing only two matches the entire day. Captain Mark Parsons explained the President’s Cup system. “Our top eight players are placed on their regional team, and the rest are captains’ picks. For us, David Lee was a surprise – Guga Concalves went to Region VII to play with his partner Graham McInerney.”

The captains had to do some strategizing, choosing their pairs and matching teams at the right level. The final rounds started getting interesting; Region IV, a wandering region from Canada through Pittsburgh on to Kentucky, and Region II played off in a semi-final. The Midwest men, Region V, had to take on the rather strong Region VIII, a “region” put together to even out the number of teams. It was a close battle, but the VIIIs won the last match and were on to the finals. Region II, who had only lost one match in all of the rounds, coasted easily into the final.

When asked about his team’s experience, Scott Falatek, captain of Region III, said, “Our first match was key. We played Region W and we lost two of three tie-breakers. And we just couldn’t come back from that. We came in second last year, but … Juan Jaysingh was a key MVP for us this year. He brings a great energy and excitement for paddle to the team.” The sweatshirts Region III wore may have had a little magic woven into them; they were purchased from Hall-of-Famer Cindy Prendergast’s company.

Ben McKnight, caught just after his Region V team was eliminated by Region VIII, was able to find the good in the day. “I think the facility is top-notch. The organizers did a great job. We are all Chicago, except for Baxter/Heath from Indiana, and they went undefeated. The best part was the camaraderie. And there was not one disputed line call. It’s just a fun day.”

Mark Fischl, from Region I, who captained the Region VIII team, said, “We had some strategy. In the finals, we played Devin Wakefield and Brian O’Connor against Mike Cochrane and Juan Arraya.” Some people were questioning that matchup, but Fischl responded, “Wakefield and O’Connor know how to play fast, so I bumped them up in position.” In the end, Region VIII gave Region II their most competition, but it wasn’t quite enough. Region II won four of the five match-ups. In order to understand how strong Region II was this year, 10 of its 13 members made it to the Round of 16 at Nationals, and 7 players made it into the quarterfinals.

The President’s Cup, overall, was about groups of players who laugh, eat, and compete together and enjoy “twinning” for the day in their team outerwear.

“The APTA did a wonderful job. I love our guys and we had a great day,” Fischl said. “And we had the best outfits.”