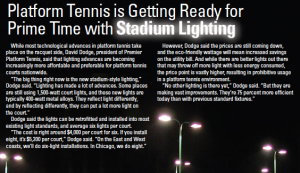 While most technological advances in platform tennis take place on the racquet side, David Dodge, president of Premier Platform Tennis, said that lighting advances are becoming increasingly more affordable and preferable for platform tennis courts nationwide.

“The big thing right now is the new stadium-style lighting,” Dodge said. “Lighting has made a lot of advances. Some places are still using 1,500-watt court lights, and these new lights are
typically 400-watt metal alloys. They reflect light differently, and by reflecting differently, they can put a lot more light on the court.”

Dodge said the lights can be retrofitted and installed into most existing light standards, and average six lights per court. “The cost is right around $4,000 per court for six. If you install eight, it’s $5,200 per court,” Dodge said. “On the East and West coasts, we’ll do six-light installations. In Chicago, we do eight.”

However, Dodge said the prices are still coming down, and the eco-friendly wattage will mean increased savings on the utility bill. And while there are better lights out there that may throw off more light with less energy consumed, the price point is vastly higher, resulting in prohibitive usage in a platform tennis environment.

“No other lighting is there yet,” Dodge said. “But they are making vast improvements. They’re 75 percent more efficient today than with previous standard fixtures.”