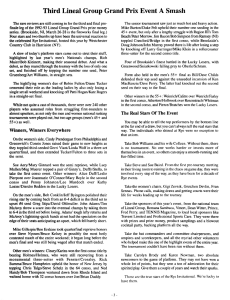 “Four stars” and “two thumbs up” were the universal reaction to the celebrated Rye Invitational, hosted by Westchester Country Club in Harrison, NY.

A slew of platform stars came out to strut their stuff, highlighted by the 1992 men’s Nationals champs, Rich Maier and Bob Kleinert, making their seasonal debut. And what a debut, as they roared through the tourney with the loss of only one set, and finished off by topping the number one seeds, Peter Gruenberg and Art Williams, in straight sets.

The high-flying women’s duo of Robin Fulton and Diane Tucker cemented their role as the leading ladies by also only losing a single set all weekend, and knocking off Patti Hogan and Kate Rogers in a straight -set final.

While not quite a cast of thousands, there were more than 240 other players who assumed roles from struggling first-rounders to almost up-setters, as not only the men and women national ranking tournaments were played out, but two age groups (men’s 45+ and 55+) as well.