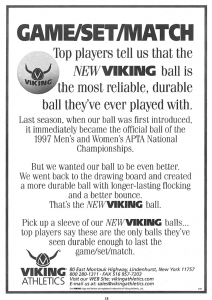 Viking had started making balls soon after they acquired the Marcraft platform tennis business in 1995. C0-incidentally, Wilson had acquired the Vittert V30 ball business from Hedstrom about the same time and decided to stop selling balls to Viking, which had been a long-time reseller, as they were a competitor.

The New Viking ball was well received and was used in the 1997 Men’s and Women’s Nationals but later batches were even better! They were on a roll.

However the ball manufacturing business was a difficult one and bad batches of balls had a habit of showing up unexpectedly.

David Kjeldsen recalls Viking’s experience just when he thought he had finally found the “perfect” ball……..

“No matter who the manufacturer was, there always seemed to surface a bad batch of balls. In the Hedstrom days bad would mean excessive “chunking”. In the early Viking days it would mean flocking that peeled off much like you would peel an orange or flocking that wore so poorly that you could only get a few games.

In our fifth or sixth year of supplying balls we had a batch of balls that were indestructible. Players were regularly reporting getting three or more sets with the balls still being playable at the end. We were very excited. I was getting pretty cocky that we had finally made the “perfect” ball.

As is necessary for proper delivery, we placed our order for balls for the following season in early April. We spent May developing a marketing plan wherein we would “guarantee” two sets of play from every ball. It would be a revolutionary guarantee for our sport. For reasons I cannot explain, in early July I decided to scrap the marketing plan and just promote the fact that were the largest supplier of balls in the industry.

Our first shipment of balls for the season were delivered in early August. The tractor trailer arrived. We always got excited when our August shipment of balls were delivered as it meant the start of the new season was only days away. When the driver opened the trailer doors a green cloud of dust appeared. I knew instantly the this was not good. I opened a case of balls that had fallen to the ground, took a ball from one of the sleeves and bounced it on the ground. My heart stopped. There on the ground was a perfect ring of optic yellow flock. It was going to be a very long season…….. and it was.”