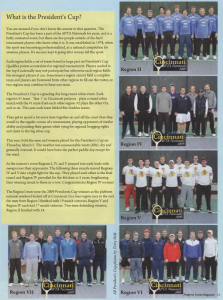 You are excused if you don’t know the answer to that question. The President’s Cup has been a part of the APTA Nationals for years, and is a hotly contested event, but there are few people outside of die-hard tournament players who know what it is. It was established in 1978, when the sport was becoming professionalized, as a national competition for amateur players. It’s success kept it going after money left the sport.

Each region fields a set of teams based in large part on President’s Cup Qualifier points accumulated at regional tournaments. Players seeded in the top 8 nationally may not participate but otherwise each region fields the strongest players it can. Sometimes a region cannot field a complete team and players are borrowed from other regions to fill out the roster, or two regions may combine to form one team.

The President’s Cup is a grueling day long round robin event. Each region’s #1 team “line 1″ in Cincinnati parlance – plays a round robin match with the #1 team from each other region. #2 plays the other #2s, and so on. This year each team fielded five doubles teams.

They get to spend a lot more time together on and off the court than they would in the regular course of a tournament, playing opponents of similar ability and pushing their games while vying for regional bragging rights and claim to the big silver cup.[enlarge image to read more]