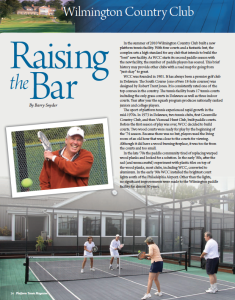 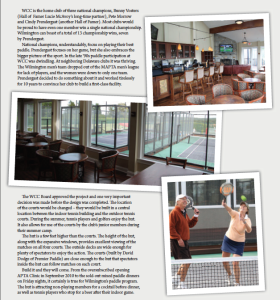 In the summer of 2010 Wilmington Country Club built a new platform tennis facility. With four courts and a fantastic hut, the complex sets a high standard for any club that intends to build the “best” new facility. As WCC starts its second paddle season with the new facility, the number of paddle players has soared. This brief history may provide other clubs with a road map for going from “just okay” to great.

WCC was founded in 1901. It has always been a premier golf club in Delaware. The South Course (one of two 18-hole courses) was designed by Robert Trent Jones. It is consistently rated one of the top courses in the country. The tennis facility boats 17 tennis courts including the only grass courts in Delaware as well as three indoor courts. Year after year the squash program produces nationally ranked juniors and college players.

The sport of platform tennis experienced rapid growth in the mid-1970s. In 1973 in Delaware, two tennis clubs, first Greenville Country Club, and then Vicmead Hunt Club, built paddle courts. Before the first season of play was over, WCC decided to build courts. Two wood courts were ready for play by the beginning of the ‘74 season. Because there was no hut, players used the living room of an old hour that was close to the courts for viewing. Although it did have a wood-burning fireplace, it was too far from the courts and too small.

In the late ‘70s the paddle community tired of replacing warped wood planks and looked for a solution. In the early ‘80s, after the sad (and unsuccessful) experiment with plastic tiles on top of the wood planks, most clubs, including WCC, converted to aluminum. In the early ‘90s WCC installed the brightest court lights south of the Philadelphia Airport. Other than the lights, no significant improvements were made to the Wilmington paddle facility for almost 30 years.

National champions, understandably, focus on playing their best paddle. Prendergast focuses on her game, but she also embraces the bigger picture of the sport. In the late ‘90s paddle participation at WCC was dwindling. At neighboring Delaware clubs it was thriving. The Wilmington men’s team dropped out of the MAPTA men’s league for lack of players, and the women were down to only one team. Prendergast decided to do something about it and worked tirelessly for 10 years to convince her club to build a first-class facility.

The WCC Board approved the project and one very important decision was made before the design was completed. The location of the courts would be changed – they would be built in a central location between the indoor tennis building and the outdoor tennis courts. During the summer, tennis players and golfers enjoy the hut. It also allows for use of the courts by the club’s junior members during their summer camp.

The hut is a few feet higher than the courts. The height of the hut, along with the expansive windows, provides excellent viewing of the matches on all four courts. The outside decks are wide enough for plenty of spectators to enjoy the action. The courts (built by David Dodge of Premier Paddle) are close enough to the hut that spectators inside the hut can follow matches on each court.

Build it and they will come. From the oversubscribed opening APTA Clinic in September 2010 to the sold-out mixed paddle dinners on Friday nights, it certainly is true for Wilmington’s paddle program. The hut is attracting non-playing members for a cocktail before dinner, as well as tennis players who stop for a beer after their indoor game.