Sutter won four National Men’s, two Mixed and one Men’s 45+. He was one of the canniest and most consistent players of the game, a student of placement and control of the ball who was at his best in the return of serve, where he altered both speed and direction. Sutter introduced many tennis skills to the game of platform tennis, and was a master of a prime offensive and defensive tool of the game, the lob. He introduced deeper lobs to the game than was common at that time and they were, in a word, devastating. (Field Club of Greenwich).

A native of New Orleans, Clifford Sutter was a superb tennis player, winning the NCAA singles championships for Tulane University in 1930 and 1932. He was undefeated in United States Davis Cup play (1931-33; 3-0 in singles), and was ranked No. 5 in the world in 1932.

After retiring from international tennis in 1934, he continued to play racquet sports at the Greenwich (Conn.) Field Club and always “maintained his loathing of losing,” as one club member put it. He worked in publishing and advertising in New York, rising to vice president at Batten, Barton, Durstine and Osborne in the 1960′s. Sutter also started winning Platform Tennis Nationals titles, and accumulated four Men’s, (1941, 1945, 1946 and 1950), two Mixed (1941 and 1960), and one Senior Men’s (1959) over a nineteen year span. His last title was won in 1960 when he and his wife, Suzanne, defeated John Beck and Susan Beck Walsh 3-6, 6-4, 6-3 in South Orange, NJ. Suzanne was plainly thrilled. Said she happily: “I just can’t wait to tell the five children.” The Sutters had previously been finalists in 1942.

Sutter also was an accomplished squash player and was runner-up in the 1951 national squash racquets doubles championships.

Footnote: In his tennis matches with the titans of the 30′s, who included the likes of Big Bill Tilden, Ellsworth Vines, Fred Perry, and John Van Ryn, Sutter relied on precision over power, finesse over speed, a placid demeanor over flamboyance. And, although he was more often the semifinalist than the champion at the end of the day—his 4-6, 8-10, 12-10, 10-8, 6-1 loss to Vines at Forest Hills in 1932 remains the longest semifinal match, in number of games, in the history of the United States championships—Sutter earned the unmitigated respect of his peers.

Tilden described Sutter’s game as “steady, sure and accurate,” in The Times in 1931, and Helen Hull Jacobs, the United States women’s champion in 1934, praised the “highly developed grace and rhythm of his strokes and footwork.”

But Sutter’s legacy to tennis may be the stand he made off the court in the 1960′s. In 1962, concerned about tennis’s declining popularity, he led a “bloodless coup” for leadership of the Eastern Tennis Association and, as president, initiated an ambitious program of construction, clinics and instruction in public schools and parks in the region. 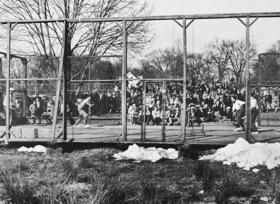