Gray discovered paddle in 1965, and right from the start, played to win. He was a fine tennis player and his natural talent, coupled with an analytical approach and hard work, quickly paid off with three National Mixed wins in a row (1966-1968), the third time this had been achieved. He followed up this accomplishment with three Men’s title in a row, from 1969-1972, a feat done only once before by Hebard and Carver. In compiling this record, Gray and his partner, Jesse Sammis, changed the game by introducing a whole new level of aggressive, but consistent, play. (Field Club of Greenwich).

Gray had barely heard of platform tennis and had played only sporadically before 1965. He had been a fine tennis player but when the seasons changed, for him the sport ended. Tennis friends talked about what a great game paddle was and Gordon finally gave it a serious try with another tennis player who was also in the game for the first time. To them, this became not just an enjoyable weekend game, but a focused endeavor that included participation in invitational tournaments and national tournaments. And, his relative inexperience with the sport did not stop him from winning the 1966 Mixed Nationals and upsetting three seeds to reach his first Men’s Nationals final.

The first couple of outings were nothing to write home about, but the fun Gray had playing this game, the challenge and love of competition, the desire to be the best and to win, showed through. The natural talent helped, but it was hard work, coupled with an analytical approach, that lead to his success. Right from the start Gordon analyzed both the matches he lost as well as the ones he won, watched others who could be learned from, practiced, incessantly.

Overlapping these wins in mixed doubles was the beginning of a reign in men’s doubles as well. Gray and his partner, Jesse Sammis III, by now a seasoned team with the precise melding of abilities, communication and concentration that are prerequisites to winning, took the Men’s Nationals three times in a row, in 1969, 1970 and 1971. Again, a hat trick, a feat done only once before by Dick Hebard and Zan Carver (1961-1963). They were finalists again in 1972. So, over a seven year period—from 1966-1972—this team got to the final round six times.

Gray was above all, a thinking player and one who thrived on paddle. Paddle was not something that he had to do, but he did it for the pure love of the game. Once he got started, he quickly became an innovator of the attacking game. Gordon attacked with consistency and it was a key to his victories. He hit balls on the rise and always had his opponents under pressure. He hit flat shots, which left little margin for error in a game where errors are costly. But, he got so proficient, he could hit the ball as hard as he wanted and not make the error. He had terrific hand-eye coordination and quickness in reacting, particularly at the net. He volleyed offensively and was difficult to pass.

Out on the court he was hard, severe, and dedicated and didn’t fool around. Along with his two partners, Anne Symmers and particularly Jesse Sammis, he introduced a whole new level of play to platform tennis and changed the game. Through all of this, he was eminently fair and an exemplary sportsman in a game where sportsmanship abounds. Gordon also had a great sense of proportion. Winning was important to him, but so were the game’s other ingredients—fun and loyalty to partner. He played the game the way he lived his life –thoroughly and with great enjoyment. He won often and he did it with a smile and, when he did lose, he could also do so with a smile.

Gordon was born in New York City and attended the Groton School (1951) and Princeton University (1955). He served two years as a Lieutenant in the U.S. Marine Corps. A long-time resident of Greenwich, CT, he was a Managing Director at Morgan Stanley Asset Management in Manhattan before retiring in 1998. Gray and his family then moved to Wilson, WY, where died at home in 2007.

Footnote: The honor award to Gray was, in a way, unique. Only once in twenty-seven previous occasions had the APTA honor award been given to a man or woman who was still in the prime of his or her game, had recently been a champion, or was still a highly ranked player. It had most often been given to people who had already made their mark, and rarely to those still making it. However, the Honor Award committee felt that Gray had such a fine record and such superb ability on the paddle court that the recognition of his talents was deserved. 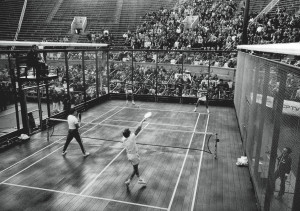 Doug Russell (left, far side) and Gordon Gray defeat Steve Baird and Chip Baird (right, near side) in five sets at the West Side Tennis Club in Forest Hills, Queens 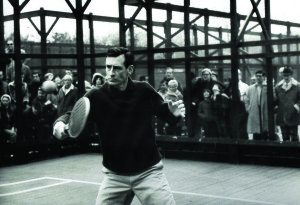