Hilary Marold burst upon the platform tennis scene shortly after beating Bobby Riggs at the real game of paddle tennis. She got a lot of publicity from this and Kim Kimberley, with the backing of the R.J. Reilly Company, brought her out East to shake up how the women’s game was being played. And that she did. She won the second tournament in which she played, the National Women’s in 1975.

Marold had considerable success on the Tribuno tour and won a number of international events. She went on to win five more Women’s title, including three in a row with Yvonne Hackenberg, and five Mixed titles with Doug Russell, including four in a row, a record matched by only Elfie Carroll.

She retired from active play after her last Women’s win, but continued to be an active teacher and promoter of the game. She had a busy life off the courts as well, appearing on ABC’s Women’s Superstars as both a competitor and commentator, providing color commentary at Wimbledon for NBC, and competing in the CBS World Racquet Championships.

Marold was dubbed “Queen of the Racquets” and probably won more state and national titles in racquet sports, appeared more times on national media as a player and commentator, and written more for national media on racquet sports than any other woman who has played competitive platform tennis. She brought a new dimension and strategy to platform tennis and ushered in a new era in the women’s game.

Born in Santa Monica, CA, and raised in a sports-minded home in Pacific Palisades, CA, Marold played tennis at the Riviera Tennis Club and paddle tennis at the Beach Club. She attended Marlborough School, graduating in 1968, and was elected their Woman of the Year in 1979. As a drama major at USC, she was a runner-up to “Helen of Troy,” the “Sweetheart of Sigma Chi,” Vice President of the Associated Women’s Students, and rush chairman of her sorority, Kappa Alpha Theta. While at USC, she won six National Public Parks doubles tennis titles, and was also a many time over National champion in paddle tennis, leading to her induction into the USPTA Hall of Fame for paddle tennis in 2012.

In 1973, Bobby Riggs, shortly after beating Margaret Court in tennis, challenged Hilary to a singles winner take all match in paddle tennis, a game he knew well. She whupped him 8-3. This lead to considerable publicity. The Los Angeles Times put a photo and story on the second page, Billie Jean King put Hilary on the cover of her Women’s Sports magazine, and Sports Illustrated featured her in their “Faces in a Crowd” section, which caught the attention of platform tennis enthusiasts out East.

In 1974, Oliver “Kim” Kimberly, an APTA National Champion in 1964 and 1967, called Hilton in California and, with the backing of the R. J. Reilly Co., offered to sponsor her trip East in order to teach her their game. The goal was to learn the screens in two weeks and enter the APTA Mixed Nationals with Kim Kimberly. Figuring she was going to travel East to play the Mixed Nationals, Hilton thought she might as well play the Women’s Doubles as well, and she took them up on their offer with the stipulation that her long time paddle tennis partner, Annabel Rogan, be included. Both traveled to Darien, CT, and there, and in upstate New York, they trained and learned the wire game from Kim Kimberley, Dave Jennings, and Myles and Dick Reilly. The rest was platform tennis history, as captured in a Sports Illustrated article in 1977.

“What we need to attract the public,” the platform tennis people must have said, “is a dynamite chick. A superstar. All we’ve got now are these country-club gals with their station wagons, needlepoint and pitty-pat serves. We want a bona fide, all-American, knock-your socks-off girl. What we need,” they mused, “is a cross between Farrah Fawcett and Chris Evert.”

They got what they needed in Hilary Hilton at age 26, a 5’5″, 129 pound, blonde hair, blue-eyed professional platform tennis player. She is pure California. Her dazzling teeth have promoted Gleem on TV. She was even—and this is too good to be true—on The Dating Game once and won a trip to Paris with Tim Culbertson the Heavyweight Boxing Champion of the Armed Services.

Hilton was weaned on the version of the game known as paddle tennis, which is played with the same paddles on a miniature tennis court, with no screens and a punctured tennis ball to deaden the bounce. The step up to platform was a logical one, and in the second tournament in which she ever played, the national championship in 1975, Hilton and her partner, Annabel Rogan, won. At the time Annabel was 23 and Hilary was 24, the youngest team ever to have won the championship. Hilary and Annabel (now Annabel Rogan Lang) teamed up again in 1979 and were finalists but Lang had always preferred living on the West coast and the pair had limited time to prepare for the increasingly competitive sponsored tournaments and associated commitments.

When she heard that Tribuno was sponsoring a women’s tour for the first time in 1977, Hilton decided to enlist her friend, Margie Gengler, as a partner. But Margie had to travel with her tennis playing husband, Stan Smith. Well, what about her younger sister Louise? Well, why not? Coming into the Tribuno, Gengler-Hilton had won all six tournaments on the circuit without dropping a single set in any final. They were a well-matched pair. Gengler, 24, had been captain of the women’s tennis, field hockey and ice hockey teams at Princeton. She has been playing racket sports all her life and had no trouble picking up paddle. She has a menacing two-handed backhand and a powerful forehand drive and developed into a fine screen player. Hilton was the first to admit that her serve was not the strong point of her game and, in fact, thought it was weak at times. However, she never felt the need to work on improving it, because she was the best volleyer in the women’s game at the time and was confident she could handle all opponents’ return of serves.

Hilton’s forte was her smartness in strategy, her competitiveness, and her natural athletic talent. She loved the psychological aspects of competition and liked to win by outsmarting an opponent, as much as by outplaying them. She complimented her partners with a variety of offensive service returns from the ad court—she won National Championships playing the deuce side, but could generate more offensive from the ad court—while charging the net behind any offensive shot. No player at the time had thought to be this aggressive, and the strategy was denigrated by some at the time as “not the game of platform tennis, just tennis on a platform court.: However, this was a time when the women’s game, in particular, was changing and becoming more offensive and was “not your mother’s game” anymore. This offensive style came from Hilton’s paddle tennis and tennis expertise, and worked effectively because of her fast hands and skillful volleying.

When Hilton was introduced to the game in ’74 and ’75, all the female players did off the wires was lob. Hilton and her partners not only lobbed, but drove off the wires, charging in behind the shot to pressure their opponents. Hilary would also often choose to volley her opponents’ overheads from mid court as a surprise tactic to turn defense into offense. While constantly challenging their opponents with offense, she and her partners played patiently enough to wait for the error from the opponents, aided by the variety of their great shot-making.

On most teams, “mine” or “yours” is sufficient as a communication device. But Gengler and Marold carried it one step further, resulting in them being presented with matching T shirts, one emblazoned “Me, Me, Me” and the other reading “You, You, You.”

In the semi-finals of the Tribuno Championship, Gengler-Hilton won the first two sets 7-6, 6-3 against Wendy Chase and Linda Wolf and, normally, the match would have been over. But, because Tribuno was putting up equal prize money ($15,000) for men and women, the women voted to play three out of five in the semis and finals, just as the men did. Gengler and Hilton lost the next two sets 4-6, 1-6, before pulling the match out 6-4 in the fifth. They went on to win the finals against Sis North and B. J. DeBree. In addition to the Tribuno World Championship, Hilton also won the Dutch Championships in Holland, the British Championships outside of London, and the Belgium Championships in Brussels.

Hilton and Gengler captured the Women’s Nationals in 1977 and 1978 and, when Gengler retired from competitive platform tennis to become the women’s tennis coach at Princeton University, Hilary teamed with Yvonne Hackenberg to win three straight Women’s Nationals in 1980-1982. Partnered with Doug Russell, she won five Mixed Nationals, including four-in-a-row (1979-1982),. It could have been six in a row but she was a runner-up in 1978, losing to ex-partner Louise Gengler and Clark Graebner. Hilary married Charlie Marold in 1979, and was five months pregnant with her first child (Chad) when she and Yvonne won the second of their three National titles in 1981. Her last Women’s National title came in 1982, after which she retired to raise Chad and have two more children, Burke and Morgan. Burke won the APTA National Boy’s 12 and under in 1997, and Chad claims that he also won a national title for his part in the 1981 win. While she had retired from competitive platform tennis, she remained active as a teacher in the western suburbs of Hinsdale and as far north as Milwaukee.

Hilary was a national champion in four different racquet sports over the years. She won twelve gold ball USTA national tennis titles, including the Husband/Wife on grass, clay and hard. In paddle tennis, she won over twenty National titles in singles, mixed and women’s doubles. Since being introduced to the sport of Pickleball by Yvonne Hackenberg in 2009, she has won ten National USAPA Pickleball Championships, in both singles and doubles (five with Yvonne) and ten Huntsman Senior World Championships in singles and doubles (five with Yvonne).

Marold had a very busy life off the various racquets courts during her active playing days. In 1977, she was the only female athlete invited by CBS to compete against five world-class male racquet athletes on the World Racquets Championships and, in 1978 she was asked to be part of the NBC broadcast team of Bud Collins and John Newcombe to do the Wimbledon coverage from England.

Footnote: Pickleball reunites old partners: After not seeing Hilary and her husband, Charlie, in well over 20 years. Yvonne decided to give Hilary a call to see if she would play with her in the Pickleball Nationals. After she explained the game, Hilary made a leap of faith and said, “Sure, let’s give it a try.” Yvonne and Hilary, (who had NEVER played the game before she went to Buckeye, Arizona for the 2009 Nationals), came in second in both their age group and the women’s masters division. This past year (2010) they teamed up again, first at the Huntsman Games in St. George, Utah. They won their 60-64 age group and the Women’s 5.0 Skill Level. Then, at the Nationals the following month, they won gold in both the 60-64 age group and the Women’s Open Division. Yvonne and Hilary’s remarkable partnership has been rekindled, thanks to pickleball.
Jim Hackenberg, USAPA Newsletter , 5/1/2011 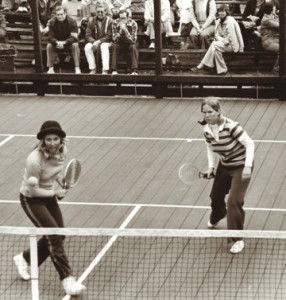 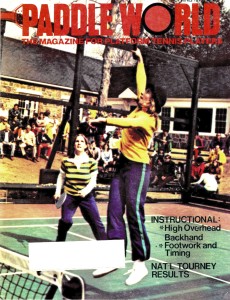