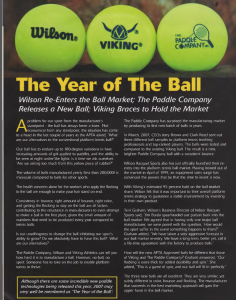 Although there were some incredible new paddle technologies being released, 2007 may very well be membered as “The Year of the Ball”

A problem for our sport from the manufacturer’s standpoint – the ball has always been a loser. Not economical from any standpoint, the situation has come to a head in the last couple of years as the APTA asked, “What are our alternatives to the conventional platform tennis ball?”

Our ball has to endure up to 100-degree variations in heat, increasing amounts of grit applied to paddles, and the ability to be seen at night under the lights. Is it time we ask ourselves “Are we asking too much from this yellow piece of rubber?”

The volume of balls manufactured yearly (less than 200,000) is minuscule compared to balls for other sports.

The health concerns alone for the workers who apply the flocking to the ball are enough to make your hair stand on end.

Consistency in bounce, right amount of bounce, right color, and getting the flocking to stay on the ball are all factors contributing to the reluctance in manufacturers to even attempt to make a ball in the first place, given the small amount of numbers that need to be produced every year compared to tennis balls.

Is our unwillingness to change the ball inhibiting our sport’s ability to grow? Do we absolutely have to have this ball? What are our alternatives?

The Paddle Company, Wilson and Viking Athletics can tell you how hard it is to manufacture a ball. However, no ball, no sport. Someone has to take on the job to enable platform tennis to thrive.

The Paddle Company has surprised the manufacturing market by producing its first new batch of balls in years.

In March, 2007, CEOs Jerry Brown and Clark Reed sent out three different ball samples to platform tennis teaching professionals and top-ranked players. The balls were tested and compared to the existing Viking ball. The result is a new, brighter Paddle Company ball with a consistent bounce.

Wilson Racquet Sports also has just officially launched their reentry into the platform tennis ball market. Having bowed out of the market in April of 19991, an equipment sales surge has convinced the powers that be that the time to invest is now.

With Viking’s estimated 95 percent hold on the ball market share, Wilson felt that it was important to their overall platform tennis strategy to guarantee a stable environment by investing in their own product.

Terri Graham, Wilson’s Business Director of Indoor Racquet Sports said, “Jim Burda spearheaded our pursuit back into the ball market. We agreed that in having only one major ball manufacturer, we were posed with the question, ‘How would the sport suffer in the event something happens to them?”

Graham added, “We have taken a very aggressive forecast in our ball market re-entry. We have a long-term, better yet, call it a life-time agreement with the factory to produce balls.”

How will the new APTA Approved balls be different that those of Viking and The Paddle Company? Graham answered, “Our flocking is extra thick for added durability and spin.” She added, “This is a game of spin, and our ball will fit in perfectly.”

The three new balls are all excellent. They are very similar, yet subtly different in color, bounce and flocking. The manufacturer that succeeds in the best marketing approach will gain the upper hand in the ball market.

NOTE 1: Viking had acquired the Wilson ball business in 2000 but the five year non-compete restriction had elapsed