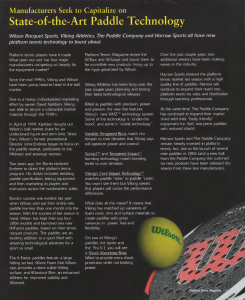 Platform tennis players have it made.

What sport our size has four major manufacturers competing so heavily for the equipment market?

Since the mid 1990′s, Viking and Wilson have been going head-to-head in the ball market.

Due to a heavy, individualized marketing effort by owner David Kjeldsen, Viking was able to secure a substantial market majority through the 1990′s.

In April of 1999, Kjeldsen bought out Wilson’s ball market share for an undisclosed figure and term limit. Since then, Wilson’s former promotional Director John Embree began to focus on the paddle market, particularly in the Midwest and amongst women. Two years ago, Jim Burda replaced Embree to direct the platform tennis program. His duties included detailing paddle specification, testing equipment and then marketing to players and instructors across the northeastern states.

Burda’s success was evident last year when Wilson sold out their entire new paddle line less than one month into the season. With the success of last season in hand, Wilson has kept their top four 2006 models and launched two new (K)Factor paddles, based on their tennis racquet products. The paddles are an exciting addition to a sport filled with amazing technological advances for a sport so small.

Platform Tennis Magazine tested the (K)Tour and (K)Surge and found them to be incredible new products- living up to the hype generated by Wilson.

Viking Athletics has been busy over the past couple years planning and testing their latest technological releases. Billed as paddles with precision, power and passion, the new line features Viking’s new VASTT” technology system.
Some of the technology is “under-the-hood”, and some is “visible technology”.

What does all this mean? It means that Viking has matched up variations of foam cores, rims and surface materials to create paddles with great variances in power, feel and flexibility. On two of Viking’s paddles, the Ignite and the Pro V-1, you will see a Shock Absorbing Ring billed to provide extra shock protection while not limiting power.

Over the past couple years, two additional vendors have been making waves in the industry.

Harrow Sports entered the platform tennis market last season with a high quality line of paddles. Harrow will continue to expand their reach into platform tennis by sales and distribution through teaching professionals.

At the same time, The Paddle Company has continued to expand their market share with their “body friendly” equipment (i.e. Soft, one-piece paddles with reduced shock).

Harrow Sports and The Paddle Company remain heavily invested in platform tennis; but, due to the launch of several new paddles in 2006 (and a new ball from the Paddle Company this summer), no new products have been released this season from these two manufacturers.