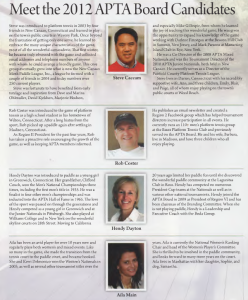 Steve was introduced to platform tennis in 2003 by four friends in New Canaan, Connecticut and learned to play on the town’s public courts in Waveny Park. Once beyond the frustration of getting only one serve, he learned to embrace the many unique characteristics of the game, most of all the wonderful camaraderie. That first winter, he became truly obsessed with the game and collected email addresses and telephone numbers of anyone with whom he could arrange a friendly game. This core group eventually grew into what is now the New Canaan Men Paddle League, Inc., a league he formed with a couple of friends in 2004 and today numbers over 250 current players.

Steve was fortunate to have benefited from early tutelage and inspiration from Dave and Marina Ohlmuller, David Kjeldsen, Marjorie Hodson, and especially Mike Gillespie, from whom he learned the joy of teaching this wonderful game. He was given the opportunity to expand his knowledge of the game working with Darlene Finnegan at the Beacon Hill Club in Summit, New Jersey, and Mark Parsons at Manursing Island Club in Rye, New York.

Steve lives in Darien, Connecticut with his incredibly supportive wife, Ann, and three children, Emily, Blair, and Paige, all of whom enjoy playing on the town’s public courts at Weed Beach.

Rob Coster was introduced to the game of platform tennis as a high school student in his hometown of Wilton, Connecticut. After a long hiatus from the sport, Rob picked up a paddle again after settling in Madison, Connecticut.

As Region II President for the past four years, Rob has taken a proactive role encouraging the growth of the game, as well as keeping APTA members informed. He publishes an email newsletter and created a Region 2 Facebook group that has helped tournament directors increase participation in all events. He currently runs an 110+ men’s platform tennis group at the Essex Platform Tennis Club and previously served on the APTA Board. He and his wife, Barbara, live in Madison, and have three children who all enjoy playing.

Hendy Dayton was introduced to paddle as a young girl in Greenwich, Connecticut. Her grandfather, Clifford Couch, won the Men’s National Championships three times, including the first men’s title in 1935. He was a finalist in four other men’s championships and was inducted into the APTA Hall of Fame in 1965. The love of the sport was passed on through the generations and Hendy competed as a young girl in Greenwich and at the Junior Nationals in Pittsburgh. She also played at Williams College and in New York on the wonderful skyline courts on 28th Street. Moving to California 20 years ago limited her paddle fun until she discovered the wonderful paddle community at the Lagunitas Club in Ross. Hendy has competed on numerous President Cup teams at the Nationals as well as in various other national tournaments. Hendy joined the APTA Board in 2009 as President of Region VI and has been chairman of the Branding Committee. When she is not playing paddle, Hendy is a Leadership and Executive Coach with the Boda Group. have three children who all enjoy playing.

Aila has been an avid player for over 10 years now and regularly plays both women’s and mixed events. Like so many in the game, she made the transition from the tennis court to the paddle court, and became hooked. She and Kerri Delmonico won the Women’s Nationals in 2005, as well as several other tournament titles over the years. Aila is currently the National Women’s Ranking Chair and head of the Women’s Player’s Committee.

She is thrilled to be involved in the paddle community, and looks forward to many more years on the court. Aila lives in Manhattan with her daughter, Sophie, and dog, Samantha.