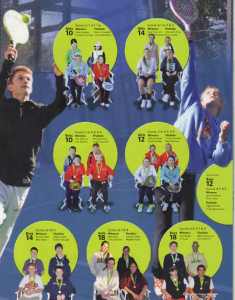 Shorts and T-shirts were what they were wearing on the courts for the 2012 Junior Nationals. That’s because unseasonable warm weather shot the mercury into the mid-50s by midday, but that warmth was short lived, giving way to the cold breezes whipping in from the waves of Franklin Lake. And by nightfall, the gas lamp’s ignitions were crackling the flames into life for the spectators who preferred to watch outside of the Indian Trail Club.

What they were watching was the culmination of a long, hard-fought day of paddle through several age brackets. The younger ones finished up earlier in the day, leaving the Boys 18s finals to continue long into the evening.

The participants were Tyler Kratky and CJ Purse of Greenwich, CT, against William Brosnan of Garden City, NJ, and Scott Safford of Malvern, PA.

The match was about endurance, and height, as Brosnan/Safford towered over Kratky/Purse, working shots at the net that the smaller team had to meet with speed.

Kratky/Purse said that in the end, they felt that their average size actually helped them win the match, 6-3, 5-7, 6-2. “I think in paddle, it actually helps to be average height: Purse said. “If you’re taller, there are some advantages as well as disadvantages. We were pretty fast today. I thought we tracked down a lot of balls, especially a lot of drop shots and won a lot of points at the net, so I actually think it was an advantage that we had.”

Kratky agreed. “When they hit lobs and whatnot, it’s tougher throughout to receive when you’re not as tall, but at the same time, we provided speed to get everything back,” he said.

Kratky/Purse had played Brosnan/Safford in the past as individual players on separate teams. This was the first time they encountered Brosnan and Safford working together. “They both had separate partners when we played them,” Kratky said. “We had an idea of what we were going to do, but the way that they played in the second set, they played too well and they took it from us, so we had to make some changes. The whole match, we were shifting it around, seeing what their weaknesses were based on how they were playing.” “Every point we were talking,” said Purse. “We were communicating, deciding what we were going to do for the next point, so our game plan actually changed halfway through the match and we started doing other stuff. We were definitely changing stuff up throughout the match.”

The Girls 18s was every bit as dramatic as the Boys 18s, with Corey Delaney and Nicki Ross of Chatham, NJ, defeating Hannah Kratky, of Greenwich, CT, and Meghan Foster of White Plains, NY, 6-3, 6-4, locking in Delaney and Ross’s sixth national championship win.

“I did recognize their strength early on in the tournament,” Ross said. “I figured that if we made it to the finals, we would be up against them: “I did not know they were last year’s winners of the younger bracket, but I knew they were good,” Delaney said. “I was not familiar with them before the tournament started but I knew there would be new younger competition that Nicki and I would have to be ready for this year. After having seen them play in the round robin part of the tournament, I knew they were good and that they were potential competition for us in the semis or finals. I was actually pretty nervous when I saw them play because they were a new team we hadn’t seen that could really play.”

“They both had great drives and were both solid players in every aspect of the game,” Delaney said. “We just played our game, with Nicki providing offense with her great drive and me providing the defense with lobs and wire play. We started blitzing more in the second set which was very effective. Nicki and I knew that if we kept the point alive long enough they would hopefully make a mistake. As for our vulnerabilities, I felt pressure when we were serving because their drives were hard and placed well, which gave us, or at least me, trouble for holding serve.”

Delaney/Ross, like many of the other 18s who finish up their Junior Nationals careers, face the challenges of being separated by college. While Ross already is in college, she said that Delaney’s studies shouldn’t be too much burden for the team to continue on.

“I am in college already, which didn’t pose a problem for us this year,” Ross said. “I played in tournaments over breaks and made sure I could come home for the Nationals. Corey practiced a lot while I was at school, and I tried to stay in shape while I was off the court! I’m sure Corey and I will play in more tournaments together in the future. Hopefully being 10 hours apart next year won’t end our platform tennis career together!”

“Hopefully, Nicki and I will find time to play some tournaments next year when we are both back from college on our breaks;’ Delaney said. “We both want to continue playing and start adjusting to the women’s game as soon as possible. I’m sure we will find a way to work something out next year so we can still be a team that competesf

“To win my final title in the junior Nationals was a great way to go out;’ she said. As for playing in Nationals next year, lam a little nervous about the change in level from juniors to women. It’s a big step, and I hope I can adjust and find success there like I have had in the juniors. I will miss the Junior Nationals because of all the new girls you get to meet and the fun you have at the tournaments.”

In the other age brackets, Ryan Freeman and Kaitlin Schroeder of Summit, NJ, defeated Alexandra Shay of Wilton, CT, and her partner, Emily Dardis, of Stamford, CT, 6-7, 6-3, 6-2, in the Girls 14s at Knickerbocker. Shay-Dardis were last year’s Girls 12s champions.