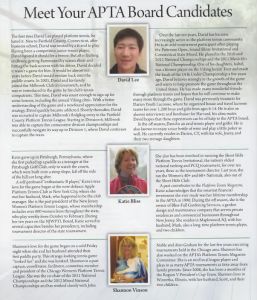 The first time David Lee played platform tennis, he hated it. New to Fairfield County, Connecticut, after business school, David was invited by a friend to play. Having been a competitive junior tennis player, David figured it should be a breeze. But after faulting endlessly, getting flummoxed by screen shots and hitting the back screens with his drives, David decided it wasn’t a game for him. It would be almost ten years before David would venture back onto the paddle courts. In 2003, David and his family joined the Milbrook Club in Greenwich, and he was re-introduced to the game by his club’s tennis compatriots. This time, David was smart enough to sign up for some lessons, including the annual Viking clinic. With a better understanding of the game and a newfound appreciation for the strategy, David quickly became addicted. Shortly thereafter, David was recruited to captain Milbrook’s fledgling entry in the Fairfield County Platform Tennis League. Starting in Division 6, Milbrook was able to capture five consecutive division championships and successfully navigate its way up to Division 1, where David continues to captain the team.

Over the last ten years, David has become increasingly active in the platform tennis community. He is an avid tournament participant often playing the Patterson Open, Sound Shore Invitational and Connecticut State Mixed. He played in the 2010 and 2012 National Championships and the 2011 Men’s 45+ National Championship. One of his daughters, Isabel, was a former player on the Viking Junior Tour and made the finals of the 14 & Under Championship a few years ago. David believes strongly in the growth of the game and wants to help promote the game throughout the United States. He has made many wonderful friends through platform tennis and hopes that he will continue to make many more through the game. David was previously treasurer for Darien Youth Lacrosse, where he organized house and travel lacrosse teams for over 1,200 boys and girls from ages 6-14. He is also an alumni interviewer and fundraiser for Harvard, his alma mater. David hopes that these experiences can be of help to the APTA board.

In the off-season, David is an avid tennis player and golfer. He is also known to enjoy a nice bottle of wine and play a little poker as well. He currently resides in Darien, CT, with his wife, Jenny, and their two teenage daughters.

Katie grew up in Pittsburgh, Pennsylvania, where she first picked up a paddle as a teenager at the Pittsburgh Golf Club, only to watch the courts, which were built onto a steep slope, fall off the side of the hill not long after.

A self-professed “enthusiastic B player,” Katie’s true love for the game began at the now-defunct Apple Platform Tennis Club in New York City, where she met her husband, Mark, who happened to be the club manager. She is the past president of the New Jersey Women’s Platform Tennis League, whose membership includes over 800 women from throughout the state, who play weekly from October to February. During her ten years on the NJWPTL Board, Katie served in several capacities besides her presidency, including tournament director of the state tournament.

She also has been involved in running the Short Hills Platform Tennis Invitational, the nation’s oldest national ranking and PCQ tournament, for over ten years, three as the tournament director. Last year, she ran the Women’s 40+ and 60+ Nationals, also out of
the Short Hills Club.

A past contributor to the Platform Tennis Magazine, Katie acknowledges that the smartest financial investment she ever made was her lifetime membership to the APTA in 1990. During the off season, she is the owner of Bliss-Full Gardening Services, a garden design and maintenance company that serves private residences and commercial businesses throughout New Jersey. She resides in Maplewood, NJ, with her husband, Mark, also a long-time platform tennis player, and two children.

Shannon’s love for the game began on a cold Friday night when she and her husband attended their first paddle party. This strange-looking tennis game “looked fun” and she was hooked.

Shannon is a past captain, coordinator, facilitator, committee member and president of the Chicago Women’s Platform Tennis League. She was the co-chair of the 2011 National Championships and the 2012 Mixed National Championships and has worked closely with John Noble and Alan Graham for the last few years executing tournaments held in the Chicago area. Shannon has also worked on the APTA’s Platform Tennis Magazine Committee.

She is an avid local league player and plays in as many APTA tournaments as time away from family permits. Since 2008, she has been a member of the Region V President’s Cup Team. Shannon lives in Winnetka, Illinois, with her husband, Scott, and their two children.