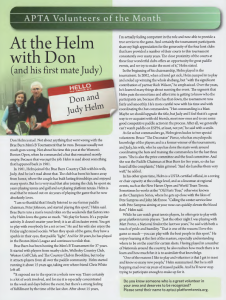 Don Helm is mad. Not about anything that went wrong with the Brae Burn Men’s B Tournament that he runs. Because usually not much goes wrong. Not about his time this year at the Women’s Boston Open, when he commanded a hut that remained mostly empty Because that was just the job. Helm is mad about something that happened back in 1981.

In 1981, Helm joined the Brae Burn Country Club with his wife, Judy. And he isn’t mad about that. The club has been his home away from home, where the couple has built lasting friendships and enjoyed many sports. But he is very mad that after joining the club, he spent six years playing tennis and golf and not playing platform tennis. Helm is mad that he missed out on six years of playing the game that he now absolutely loves.

“I am so thankful that I finally listened to our former paddle chairman, Peter Johnson, and started playing this sport,” Helm said. Brae Burn runs a men’s round robin on the weekends that factors into why Helm loves the game so much. “We play for hours. It’s a popular activity It doesn’t matter your level; it is an all-inclusive event. You get to play with everybody for a set or two:’ He and his wife also enjoy the Friday night mixed socials. When they speak of the game, they have a sparkle in their eyes, that paddle “light.” And for 20 years, he has played in the Boston Men’s League and continues to relish that. [enlarge image to read more]