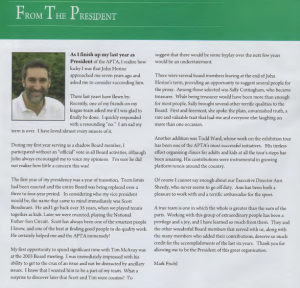 As I finish up my last year as President of the APTA, I realize how lucky I was that John Horine approached me seven years ago and asked me to consider succeeding him.

These last years have flown by. Recently, one of my friends on my league team asked me if I was glad to finally be done. I quickly responded with a resounding “no.” I am sad my term is over. I have loved almost every minute of it.

During my first year serving as a shadow Board member, I participated without an “official” vote in all Board activities, although John always encouraged me to voice my opinions. I’m sure he did not realize how little a concern this was!

The first year of my presidency was a year of transition. Term limits had been enacted and the entire Board was being replaced over a three to four-year period. In considering who my vice president would be, the name that came to mind immediately was Scott Bondurant. He and I go back over 35 years, when we played tennis together as kids. Later we were reunited, playing the National Father-Son Circuit. Scott has always been one of the smartest people I know, and one of the best at finding good people to do quality work. He certainly helped me and the APTA immensely!

My first opportunity to spend significant time with Tim McAvoy was at the 2003 Board meeting. I was immediately impressed with his ability to get to the crux of an issue and not be distracted by ancillary issues. I knew that I wanted him to be a part of my team. What a surprise to discover later that Scott and Tim were cousins! To suggest that there would be some byplay over the next few years would be an understatement.

There were several board members leaving at the end of John Horine’s term, providing an opportunity to suggest several people for the proxy. Among those selected was Sally Cottingham, who became treasurer. While being treasurer would have been more than enough for most people, Sally brought several other terrific qualities to the Board. First and foremost, she spoke the plain, unvarnished truth, a rare and valuable trait that had me and everyone else laughing on more than one occasion.

Another addition was Todd Ward, whose work on the exhibition tour has been one of the APTA’s most successful initiatives. His tireless effort organizing clinics for adults and kids at all the tour’s stops has been amazing. His contributions were instrumental in growing platform tennis around the country.

Of course I cannot say enough about our Executive Director Ann Sheedy, who never seems to go off duty. Ann has been both a pleasure to work with and a terrific ambassador for the sport.

A true team is one in which the whole is greater than the sum of the parts. Working with this group of extraordinary people has been a privilege and a joy, and I have learned so much from them. They and the other wonderful Board members that served with us, along with the many members who added their contributions, deserve so much credit for the accomplishments of the last six years. Thank you for allowing me to be the President of this great organization.