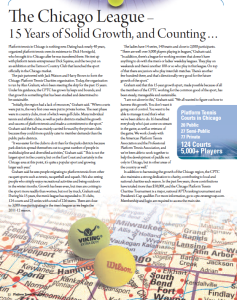 Platform tennis in Chicago is nothing new. Dating back nearly 40 years, organized platform tennis owes its existence to Dick Hornigold, who brought it to Chicago after he was transfered there. He met up with platform tennis entrepreneur Dick Squires, and the two put on an exhibition at the Exmoor Country Club that launched the sport officially in the Chicago market.

The pair partnered with Jack Watson and Harry Brown to form the Chicago Platform Tennis Charities organization. Today, the organization is run by Alan Graham, who’s been steering the ship for the past 15 years. Under his guidance, the CPTC has grown by leaps and bounds, and that growth is something that has been studied and determined to be sustainable.

“Initially, the region had a lack of resources,” Graham said. “When courts were put in, the very first ones were put in private homes. The next phase were in country clubs, most of which were golf clubs. Many individual tennis and athletic clubs, as well as parks districts studied the growth and success of platform tennis and made a commitment to the sport.” Graham said the ball was mainly carried forward by the private clubs because they could more quickly cater to member demands than the public parks districts.

“It was easier for the clubs to do it than for the parks districts because park districts spread themselves out to a great number of people in multidiscipline and diversified activities,” Graham said. “This is not the largest sport in the country, but on the East Coast and certainly in the Chicago area at this point, it’s quite a popular sport and growing larger each year.”