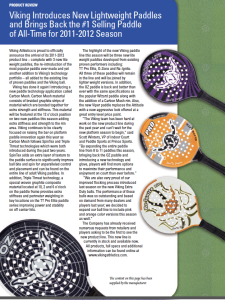 Viking Athletics is proud to officially announce the arrival of its 2011-2012 product line – complete with 3 new lite weight paddles, the re-introduction of the most popular paddle ever made and yet another addition to Viking’s technology portfolio – all added to the existing line of proven paddles and the Viking ball.

Viking has done it again! Introducing a new paddle technology application called Carbon Mesh. Carbon Mesh material consists of braided graphite strips of material which are bonded together for extra strength and stiffness. This material will be featured at the 12 o’clock position on two new paddles this season adding extra stiffness and strength to the rim area. Viking continues to be clearly focused on raising the bar on platform paddle innovation again this year as Carbon Mesh follows SpinTex and Triple Threat technologies which were both introduced during the past two years. SpinTex adds an extra layer of texture to the paddle surface to significantly improve ball bite and spin for unparalleled control and placement and can be found on the entire line of adult Viking paddles. In addition, Triple Threat technology, a special woven graphite composite material located at 10, 2 and 6 o’clock on the paddle frame provides extra stiffness and perimeter weighting in key locations on the TT Pro Elite paddle series improving power and stability on off center hits. [enlarge image to read full article]