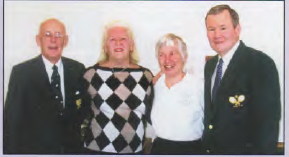 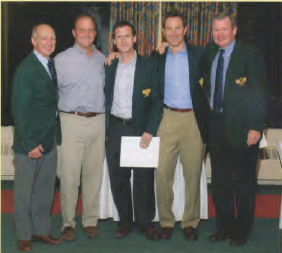 In a celebration held at the Women’s 40/60 National Championships on February 11, 2009, Winnie Hatch and Sharon Hummers were inducted into the Platform Tennis Hall of Fame, in recognition of their outstanding achievements both on and off the court over many years.

The induction presentations were delivered by Steve Baird for Edwina “Winnie” Worth Hatch and by Bob Brown for Sharon K. Hummers, before a large, enthusiastic, and appreciative audience at the Canoe Brook Country Club in Summit, New Jersey. Each honoree acknowledged the election with thanks, and other comments of adoration followed by several relatives and friends.

The induction of Mansager and Goodspeed, the 2008 Hall of Fame Inductees, took place on January 17, 2009 at the Cincinnati Midwesterns. Todd Ward explained why:

The Cincinnati Midwesterns played out the way most Midwesterns have gone for the last several years. What differed this year was that at the Saturday night party at the Ridge Club, 120 people witnessed a little platform tennis history.

Cincinnati benefitted from the lengthy quarter-final match that Flip and Scott played at previous year’s 2008 Nationals in Rochester. As a result they didn’t make it to ceremony of their induction to The Platform Tennis Hall of Fame until after 10:30 p.m. which required rescheduling the ceremony until the 2009 Cincinnati Midwestern’s.

Hall of Fame representatives Steve Baird, Walt Peckinpaugh, and Fritz Odenbach were all on hand to dedicate the honor to the sport’s greatest team to ever play the game. All talked of the amazing feats the duo accomplished on the court – not to mention off the court as well. Both players addressed the crowd with some light-hearted barbs at each other but humbly accepted the honor with the same ease and grace they displayed on the court for 16 years together.

The induction speech for Goodspeed and Mansager was delivered by Steve Baird.

And by the way, Goodspeed and Mansager defeated Estes and Cochrane 6-4, 7-5 in the Midwesterns final. Flip and Scott hope to continue their mastery of Cincinnati this March as they will return and go for their 8th National Title in March.