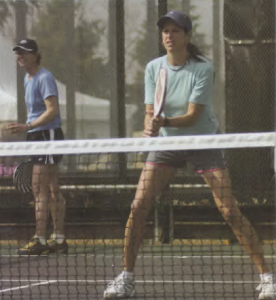 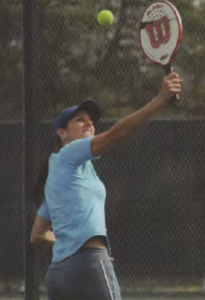 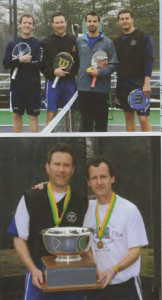 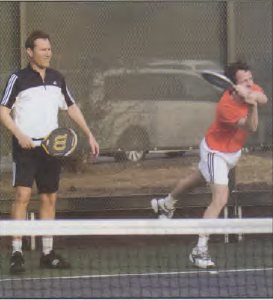 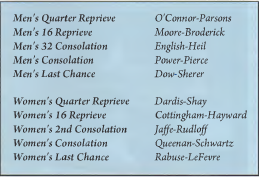 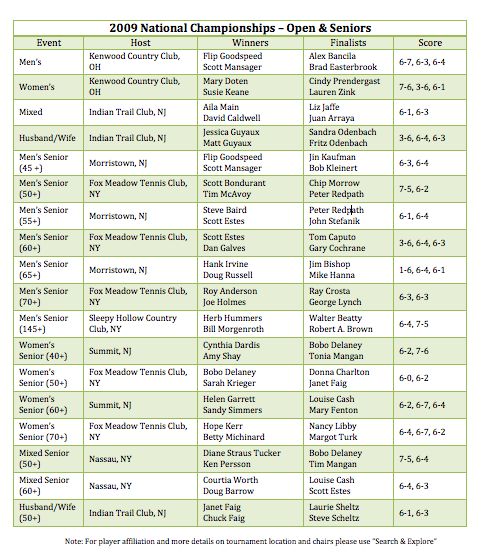 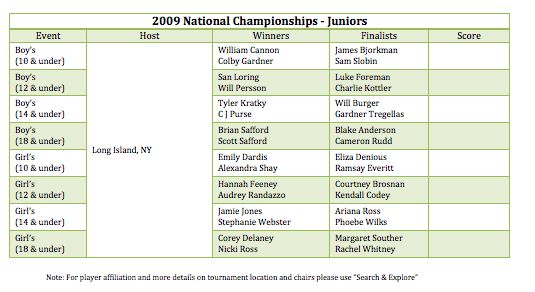 In some ways, the Nationals is like any other tournament. There are draws, favors, reunions with friends, good lunches and the highs and lows of personal performance. But the Nationals is also something very different. There are temporary courts and a camera tower. Every hut has monitors and extra balls. There’s a merchandise tent, lots of sponsor banners and multiple parties. A masseuse works tired muscles. The finals play to big crowds. And at the Nationals the “thrill of victory” and the “agony of defeat” are just that much more intense.

The bulk of the women’s tournament was played Friday. Play started at 8 a.m. and ran reasonably on time, with the last quarters finishing up just before 6 p.m. The weather was warm and windy like Thursday, with overcast skies.

All the seeds passed through to the quarter-finals and the growing audience was treated to exceptional paddle on all sides. On the permanent courts, spectators watched the Delmonico-Main/Prop-Schneebeck match as well as the Ohlmuller-Sheldon/Delaney-Mangan match, sitting on chairs and benches on the wide platform around the fire pit.

At the back side of the hut, where there is large covered porch, the Dardis-Shay/Prendergast-Zink and Budde-Welscher/Doten-Keane matches were played on the temporary courts installed over Kenwood’s tennis courts. The play was inspiring, and was a fascinating show of the different skills and styles of the players.

One spectator was overheard saying, ‘Why would you want to be playing when there’s paddle like this to watch?” while another was asking, “Doesn’t watching this make you want to go play?” It’s likely that more regular players would answer “yes” to the second question.

On Saturday morning, the Cincinnati fans pulled for their team, but in the end opponents Doten & Keane were the ones to move to the finals. The other semi was an east coast battle between long time partners Bobo Delaney & Tonia Mangan and defending champs Prendergast & Zink. With overpowering returns and wall-like volleys, Zink and Prendergast bested Delaney and Mangan.

The crowds grew throughout the day as the men joined the women. By the time the women’s final went on at 3 p.m. the hut at Kenwood was impossibly loud and boisterous. Spectators filled all available seating. Fans got what they had come for in an exciting final.

Enjoying the gorgeous but windy 70 degree weather, the spectators were treated to an amazing display of athleticism and power.

The first set was an evenly matched and aggressive spectacle. All four ladies brought their best games. Doten & Keane won in a tie-break.

In the second set, Prendergast & Zink pulled out to a wide early lead of 5-0 and ended up bringing it home 6-3. Then, as often happens in this sport, the tide turned and 4-time champs Mary Doten of Hinsdale, IL and Susie Keane of Grosse Pointe, MI overcame defending champions Cindy Prendergast of Wilmington, DE and Lauren Zink of Lititz, PA, 6-1.

Flip Goodspeed and Scott Mansager Earn Eighth National Title
The men spent Saturday working their way through the draws, looking for the coveted finals slots. Of the 16 seeded teams, 14 made it to the round of 16. English-Heil (6) and Albrikes-Jonason (1s) lost in the round of 32, with English-Heil going on to win the 32 Consolation.

In the round-of-16, unseeded Mark Parsons and Brian O’Connor, who had won over Albrikes-Jonason, defeated #2 seeds Mike Cochrane and Scott Estes in three sets. They lost to Marino-Stulac in the semis but went on to win the quarter-reprieve.

The final day of the APTA National Men’s and Women’s Championships was focused on the late rounds of the men’s draw. In contrast to the beautiful sunny Saturday, the Men’s semi finals and final matches on Sunday were played under threatening skies and wind gusts that made every lob a bit of guesswork.

In the finals, Goodspeed and Mansager played carefully, waiting for their chance to attack. Soft overheads, were mixed with slashes and spins. Booming drives were countered by soft hands again and again. As in the women’s final, the first set went to a tie-break, won by Bancila and Easterbrook.

What would be a good way to finish up the season after being inducted into the Platform Tennis Hall of Fame, winning the Men’s Senior 45+ title, and securing the number one position in national rankings? How about an 8th National Championship title. That’s exactly what Flip Goodspeed of Grand Rapids, MI and Scott Mansager of Chicago, IL did by taking the next two sets 6-3, 6-4, grabbing yet another APTA Men’s Open National Championship title.