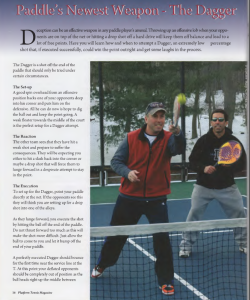 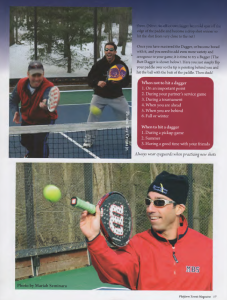 Deception can be an effective weapon in any paddle player’s arsenal. Throwing up an offensive lob when your opponents are on top of the net or hitting a drop shot off a hard drive will keep them off balance and lead to a lot of free points. Here you will learn how and when to attempt a Dagger, an extremely low percentage shot that, if executed successfully, could win the point outright and get some laughs in the process.

The Dagger is a shot off the end of the paddle that should only be tried under certain circumstances.

The Set-up
A good spin overhead from an offensive position backs one of your opponents deep into his corner and puts him on the defensive. All he can do now is hope to dig the ball out and keep the point going. A weak floater towards the middle of the court is the perfect setup for a Dagger attempt.

The Reaction
The other team sees that they have hit a weak shot and prepare to suffer the consequences. They will be expecting you either to hit a slash back into the corner or maybe a drop shot that will force them to lunge forward in a desperate attempt to stay in the point.

The Execution
To set up for the Dagger, point your paddle directly at the net. If the opponents see this they will think you are setting up for a drop shot into one of the alleys.

As they lunge forward, you execute the shot by hitting the ball off the end of the paddle.
Do not thrust forward too much as this will make the shot more difficult. Just allow the ball to come to you and let it bump off the end of your paddle.

A perfectly executed Dagger should bounce for the first time near the service line at the T. At this point your deflated opponents should be completely out of position as the ball heads right up the middle between them. (Note: An off-center dagger hit could spin off the edge of the paddle and become a drop shot winner so hit the shot from very close to the net)

Once you have mastered the Dagger, or become bored with it, and you need to add even more variety and arrogance to your game, it is time to try a Bagger (The Butt Dagger is shown below). Here you just simply flip your paddle over so the tip is pointing behind you and hit the ball with the butt of the paddle. Then duck!