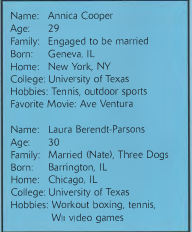 Among others, Laura played against Annica Cooper in 10-and-under competition.

During childhood, Laura moved to Florida where she was ranked #1 in the state in 18- and-under tennis competition. She had a national ranking of #16.

Laura earned a tennis scholarship to the University of Texas. In her sophomore year, she reached the prestigious status of All-American.

After college, Laura hit the pro tour for two years. “I didn’t like being on the tour. I always felt alone,” she said.

Laura had only played in four tournaments before getting the “out-of-the-blue” call in October from her former 10-and-under junior rival Annica Cooper to play in the Chicago Charities tournament.

Annica Cooper was born in the Chicago suburb of Geneva, Illinois She was a tennis sensation, to say the least.

In her early years, Annica competed against Berendt at Chicago’s Midtown Club.

When Annica reached the 16′s, she proved that she was a force to be reckoned with. At 16, she won the Western Open and was ranked #8 nationally.

Selected on a full scholarship to play tennis at UCLA, Annica played #1 singles and won the PAC Singles Championship. In her best year, she was seeded #8 at the Division 1 National Championships.

After college, Annica went on the WTA Tennis Tour for two years where she had modest success.

Annica plays in the New York league and has shown an interest to compete at a higher level. With her league partner nine months pregnant, Annica called her old tennis rival to play together in the Chicago Charities. She said, “I had no idea how good Laura is. We had so much fun playing the Charities, that winning was just a bonus”

In the 2007 Charities (November), the new team ran through the 8th, 3rd, 2nd, and 1 st-seeded teams. None of the veteran players could recall any past team completing this feat.

“I hope we play more tournaments together,” Annica said. She concluded, “We want to play the National Championships together this March in Rochester. To win the Nationals would be the ultimate! I think we have a good chance as long as we are healthy ‘

Laura and Annica said that they didn’t have any goals or expectations of how well they would do before going into the Chicago Charities. It was clear after speaking with these ladies that having a good time, competing, and meeting new friends is what they are all about.

There is no doubt that this pair can be a force in women’s platform tennis for many years to come. Look for this team to make an impact at the 2008 National Championships.