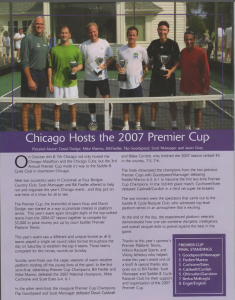 0n October 6th & 7th Chicago not only hosted the Chicago Marathon and the Chicago Cubs, but the 3rd Annual Premier Cup made it’s way to the Saddle & Cycle Club in downtown Chicago.

After two successful years in Cincinnati at Four Bridges Country Club, Scott Mansager and Bill Fiedler offered to help run and organize this year’s Chicago event… and they put on one heck of a show for all to see.

The Premier Cup, the brainchild of Jason Gray and David Dodge, was started as a way to promote interest in platform tennis. This year’s event again brought eight of the top-ranked teams from the 2006-07 season together to compete for $5,000 in prize money put up by court builder Premier Platform Tennis.

This year’s event saw a different and unique format as all 8 teams played a single set round robin format throughout the day on Saturday to establish the top 4 teams. Those teams competed for the money rounds on Sunday. [enlarge image to read full coverage of event]