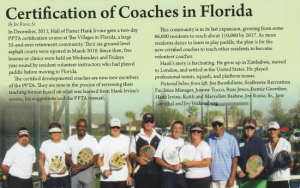 In December, 2011, Hall of Famer Hank Irvine gave a two-day PPTA certification course at The Villages in Florida, a large 55-and-over retirement community. Their six ground-level asphalt courts were opened in March 2010. Since then, free lessons or clinics were held on Wednesdays and Fridays year-round by resident volunteer instructors who had played paddle before moving to Florida. The certified developmental coaches are now new members of the PPTA. They are now in the process of reviewing their teaching format based on what was learned from Hank Irvine’s course, his suggestions and the PPTA manual.

This community is in its last expansion, growing from some 86,000 residents to reach about 110,000 by 2017. As more residents desire to learn to play paddle, the plan is for the new certified coaches to teach other residents to become volunteer coaches.

Hank’s story is fascinating. He grew up in Zimbabwe, moved to London, and settled in the United States. He played professional tennis, squash, and platform tennis. Irvine was inducted into the Hall Fame in 1995