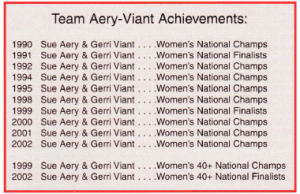 On March 17, 2002, Sue Aery (and partner, Gerri Viant) shocked the spectators at the National Championships. No, it wasn’t the service let cord that dropped in for a match point ace. Nor was it the tight third set victory After all. Sue and Gerri had won seven of the previous eleven Women’s Open National Titles, including three in a row. The surprise came to the crowd when Sue picked up the microphone and announced her retirement from platform tennis.

Sue and Gerri had accomplished more than they ever could have imagined thirteen years earlier. Just when 400 exuberant fans were expecting Sue’s modest victory speech, her tearful eyes and trembling voice proclaimed a different message, “As of now, I am announcing my retirement from platform tennis to pursue a career in chiropractic therapy.”

Sue’s mother. Peg, said, “Sue has had extensive chiropractic therapy over her athletic career and she feels that she could not have achieved what she has without it.” Peg concluded, “I think that it’s great. Sue wants to be able to give back to people the help she has personally received from chiropractic care.”