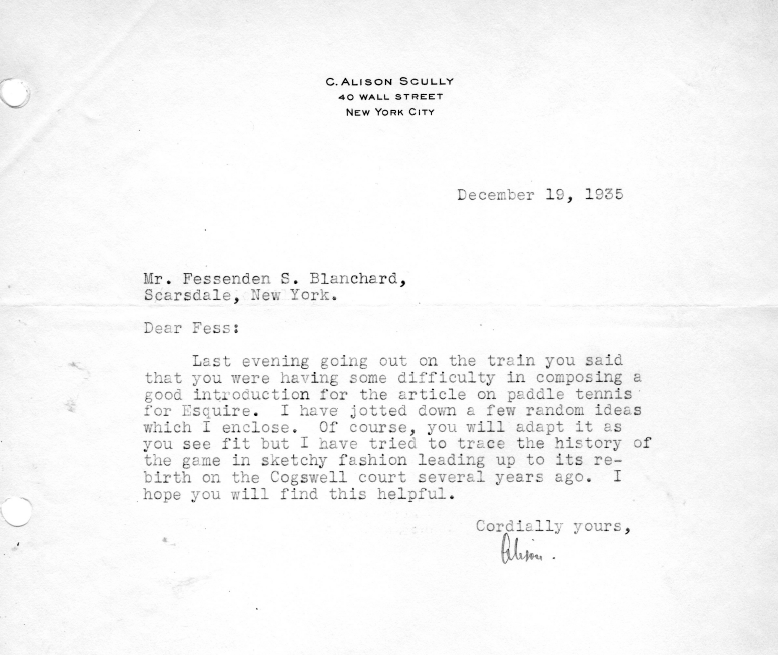 For some time, Blanchard wondered whether or not he and Cogswell had been carrying on with a game invented many centuries before. The matter arose when Esquire magazine requested some information on the game and Blanchard sought the help of an eminent historian and Old Army Athlete by the name of C. Alison Scully.

In December 1935, Scully shared the bulk of his research in a letter to Blanchard as part of an article Blanchard was writing for Esquire.

The origin of the game of paddle tennis is lost in the mists of antiquity. The recent widespread interest in the game has renewed the desire for certitude as to its beginnings and, as a result, much that is new and enlightening to the students of the history of the game has been developed.

Recent discoveries on the Coast of Wales establish that a game, which was undoubtedly the forerunner of paddle tennis, was part of the life of the Piltdown man. Crude drawings on the walls of the caves show the players in characteristic positions. For paddles, the hip-bone of the mammoth was used. Life in this epoch was primitive and arduous and, as there was very little time for practice, the game probably did not reach a high stage of development.

The Princeton Archaeological Expedition of 1930 brought to light some very important information. Excavations in the vicinity of Abdab-mer-Sub establish that the characteristic Egyptian figure with upraised hand so familiar in all Egyptian art is not that of a female dancer, as generally supposed, but a drawing from life of Tut-Ankh-Amen serving in the first recorded game of paddle tennis doubles on the Mediterranean Coast. Tut-Ankh-Amen and Pharaoh VII played for Egypt, Caesar and Crassus for Rome. Cleopatra was one of the spectators.

As a result of further research work at Pompeii, a large flat concrete slab has been uncovered. While it was at first thought that this was a rubbing table for one of the Roman baths, the more discriminating students of archaeology are convinced that it was used for paddle tennis.

There is no record of paddle tennis in Denmark, Norway, Sweden, Latvia or Esthonia prior to A.D. 556, although it is probable that Hengist and Horsa brought the game back from England to the Continent on the latter date.

The diary of Christopher Columbus, which has just been disclosed to the world, contains references to the grumblings of the crew of the Pinta because of lack of space on the aft deck for exercise. No game adapted for use on shipboard other than paddle tennis was then known and it must have been paddle tennis that was played on that expedition.

In Colonial America, Captain John Smith and Pocahontas won the mixed doubles championship of Virginia at an early date. John and Priscilla Alden were another well-known team. George Washington first played the game after the battle of White Plains. It is a curious coincidence that the great revival of interest in the game should have taken place on the very ridge of land on which this battle was fought, at a point some five miles further south. There on the property of James K. Cogswell, in Scarsdale, paddle tennis was reborn.