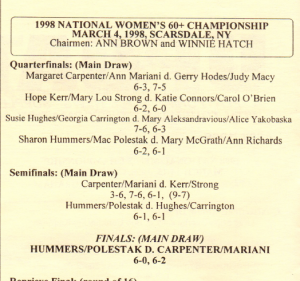 Thanks in great measure to the tireless efforts of Winnie Hatch who reportedly wrote every female senior paddler on the APTA list, and anyone else she could think of, the APTA now has a new senior age group for women, the 60+.

The first attempt at a Women’s 60+ Nationals was during the 1991-1992 season in Philadelphia. For the next five years Ann Brown at Fox Meadow Tennis Club tried to get enough teams for the event without success and finally Ann Brown and Winnie Hatch gathered together enough participants to hold a National Tournament at FMTC in March 1998.