For David Kjeldesen, platform tennis started as a passion, but ended up a business and a way of life. First, as a distributor and later as a manufacturer, he enhanced the game by getting the best equipment into players’ hands at a fair price, and offering the best customer service of any vendor to the game. Kjeldesen also started the parent-child Viking Cup, backed the Viking Junior Tour, and sponsored the Junior Nationals. He gave the seed money for the formation of the Professional Platform Tennis Association, and for the APTA’s first website.

In the mid 1980s, by his own description, he was one of the world’s most dedicated couch potatoes. Then, one Friday evening his sedentary existence miraculously became a thing of the past when he was invited to play mixed doubles on a small, elevated court surrounded by chicken wire. With the paddle he was given in one hand, a can of beer in the other, and a cigar between his lips, Kjeldsen became the poster child for sports enthusiasm. He got hooked on the game and started playing more and more.

The only problem was it was not a cheap hobby, since a sleeve of balls cost $10.

Kjeldsen called Hedstrom in Ohio and negotiated a deal where he could buy the Vittert balls he was using by the case load at a discounted price, and distribute them to friends and clubs that needed them for tournaments. Hedstrom was delighted with the increase in business and offered further discounts. Finally, Kjeldsen began thinking: “Why not set up a distributorship for a broad range of platform products?” That lead to the formation of A2Z Products, through which he would sell the products of leading platform paddle manufacturer, Marcraft Recreation Corporation, at dealer pricing. Overnight he was in business. He sold the first paddle at his club in 1989, and then expanded his sales to players across Long Island, eventually developing retail accounts nationally. By the time he purchased Marcraft’s domestic platform tennis production facility in April of 1995, he was its largest customer.

David’s impact on the sport was immediate as his technological advances and innovations made the game easier to play. But, it was his leadership and optimism that separated David from everyone else. His passion and love for the sport was contagious and his pursuit of excellence made those around him believe that he was capable of anything! His second place finish at the Ross Tournament back in his playing days proved the point.

For over 20 years, the unofficial start to every tournament was when there was an official “David Sighting” of Kjeldsen wearing his trademark Viking horned hat. He embodied the spirit of the game, welcoming all players—whether new to the tournament scene or the top seeds—with a warm smile, or a new paddle to try, or, sometimes, if you were lucky, a joke you could not repeat. He was truly one of the game’s greatest ambassadors. Dave was also a major force behind the growth in the game by donating jackets, tee shirts, hats, bags, mouse pads, and other merchandise for both adult and junior events

Kjeldesen went above and beyond being “just a vendor” because he felt it was the right thing to do for the game. He understood that “the toughest thing about success is that you have got to keep on being a success.” Anyone who ever called Viking after hours knew that the voice on the other end was none other than “that guy with the horns.” Patty Hogan recalled that her phone calls with David always ended the same way. She thanked him for his help and he responded by saying, “it’s my honor and privilege.”

David’s persistence, passion, expertise and vision played a major role in where the game is today. 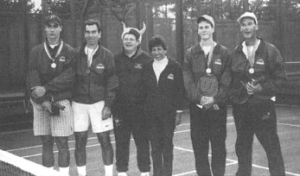 18 and-under winners Patrick and Pat Nowlan from Philadelphia (R) are congratulated by David Kjeldsen and Caryl Swain, as are runners-up Ben and John Holskin, also from Philly.